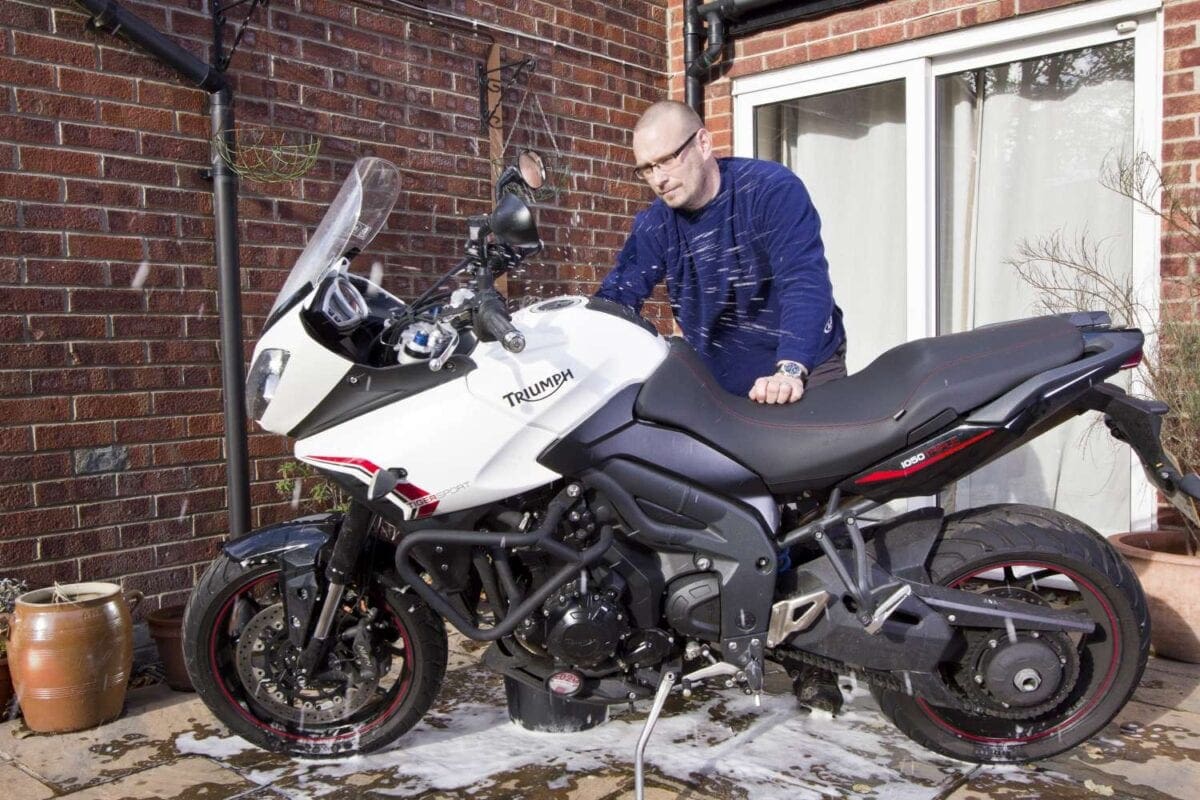 Cleaning your bike is an important part of maintenance. It gives you chance to check for damage, stops rust or corrosion and makes it look good. We’re often asked whether Fairy liquid is safe to clean your bike with. We decided to find out for good…

Editor of Motorcycle Sport and Leisure, John Milbank, grabbed a bucket and took on the challenge:

Chatting with a reader Dino Heath at a bike meet a while ago, we got into a discussion on bike cleaning. Dino shines up his R1150GS with washing-up liquid, but I’d always thought this contained salts that could cause corrosion. Back in the office the next day, I found a case of cleaning kit from SDoc100, and got cracking…

With a bucket of Tesco’s washing-up liquid and water for one side of the filthy Tiger Sport (our household budget doesn’t stretch to the big brands), and an array of posh cleaning products for the other, I started with the cheap, and very foamy option. The bike was covered with road grime, and a very unhealthy splattering of bugs on the front. Using a microfibre wash mitt, most of the general road crud floated off quite easily, but the bugs took a hell of a lot of scrubbing. It’s fair to say that I’m a bit anal when it comes to vehicle paintwork – while the Triumph’s white paint shouldn’t show rubbing marks like black can, I still prefer to be a lot more gentle than I was. 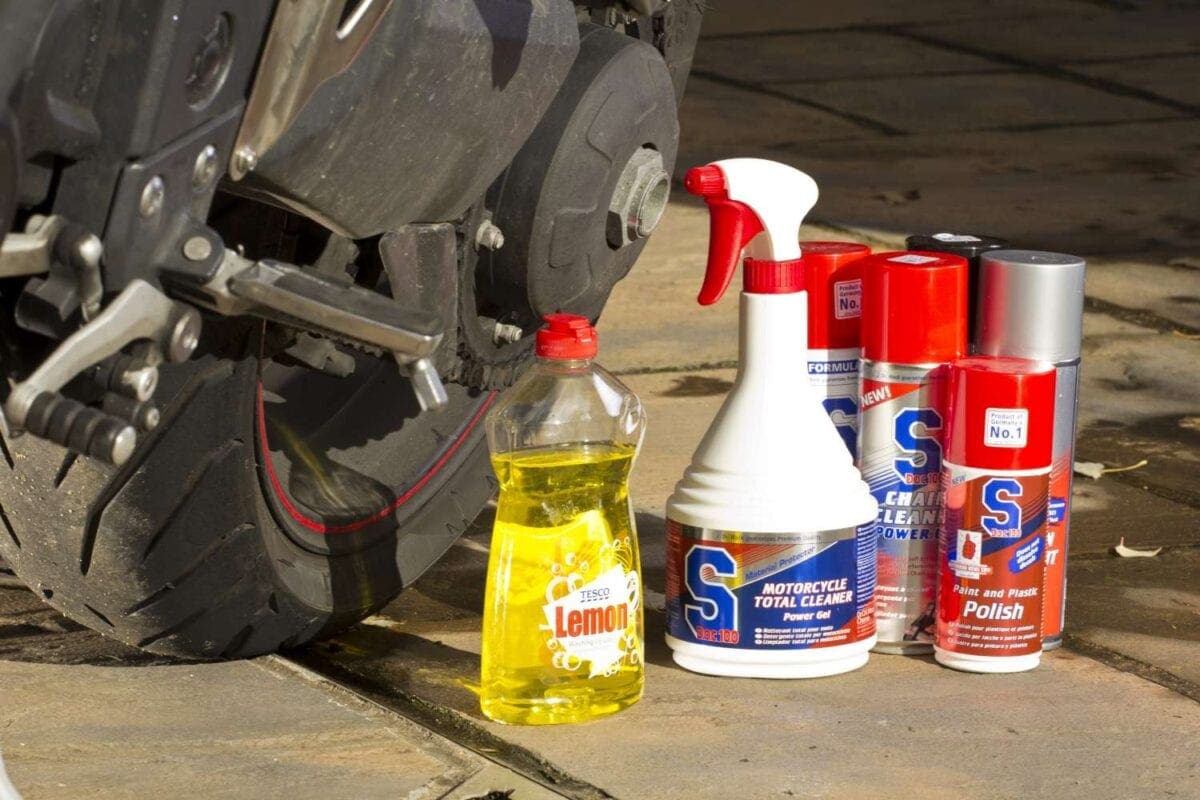 Cleaning the crevices around the engine was a little harder – it’s tricky to get the mitt into the smallest areas, and while a jetwash would help, I tend to be wary of them on unfaired bikes for fear of messing with the electrics.

Cleaning the nearside of the bike with SDoc100’s Gel Total Cleaner was a lot easier – the sticky gel hangs onto the surfaces of the bike, and can be left for between five and 15 minutes, depending how grubby it is, before spraying with a hose, and agitating with a sponge where needed. A cuppa break meant I waited the full amount of time, and the bugs did come off a lot easier. Some still needed a gentle rub, but generally they just floated clear.

Getting into the small parts of the engine and underneath the tail was much easier with the gel, although I did notice the rubber hoses had a little bit of a discoloured film over them after washing (some wax spray soon sorted this).

The problem with the Gel Total Cleaner is the price – I used nearly a third of the bottle cleaning half the Tiger, and at £15.99 a pop, that’s not to be sniffed at. To be fair, the bike was in a terrible state, and regular cleaning should see you using a lot less. Looking at the front of the bike, the difference was obvious – the offside still looked a little grubby, and I could feel bug juice as I ran my finger across the painted surface. I’d missed the odd stubborn mark on the nearside, but considering the state of the bike when I’d started, the SDoc100 had done a good job.

For details of SDoc100 products go to www.sdoc100.co.uk

Does washing-up liquid damage your vehicle?

We asked Dr Bob Eden BSc MSc PhD MICorr (Member of the Institute of Corrosion) for the truth:

“Washing up liquid does contain a ‘salt’ but this is the active ingredient and should not be confused with road salt. There is nothing in a washing-up liquid that will exacerbate corrosion – there’s no sodium chloride salt to worry about. The issue regarding corrosion is the ‘chloride’ bit of the salt. In ‘chloride nests’ at the base of a corrosion pit, the chloride exists as hydrogen chloride, which in damp conditions creates a solution of dilute hydrochloric acid, and it’s this acid that does the damage. You need to avoid ‘chloride’ from any and all sources, e.g. seawater, road grit and fish & chips (but not washing up liquid). When I wash my aluminium bodied Lea Francis, a dash of Fairy is just fine…”