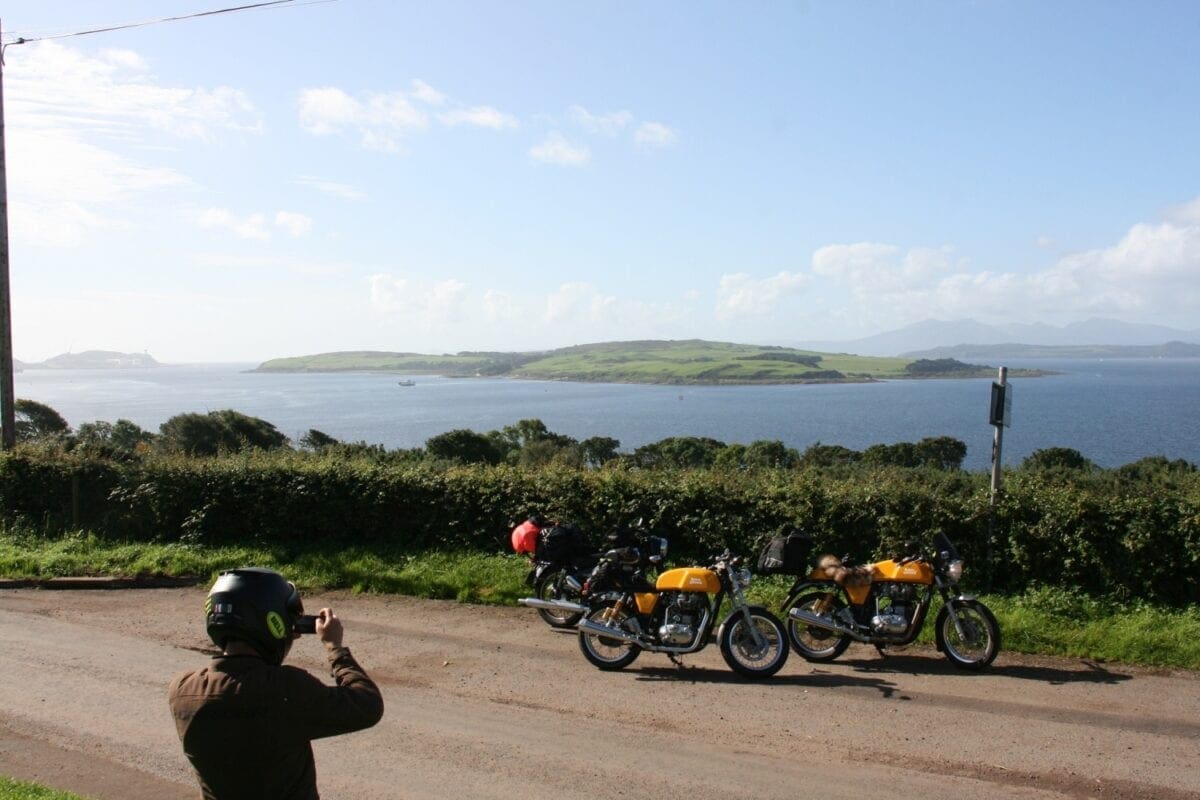 Cooperb to Ardnamurchan by Royal Enfield… 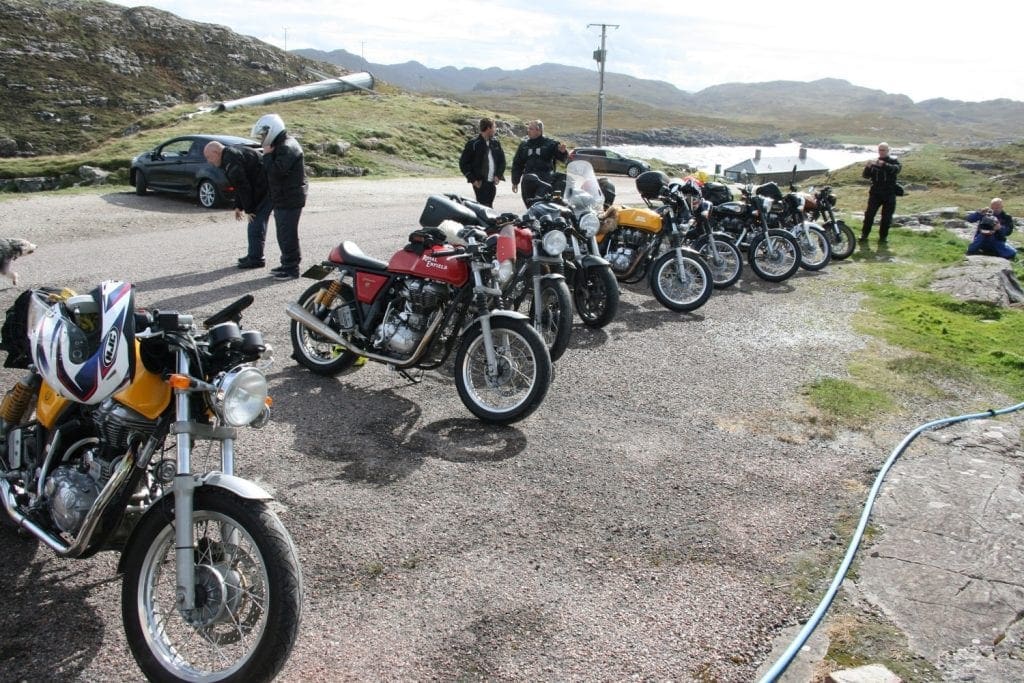 Touring bikes these days are a lot like modern trucks. No seriously they are! Think about old trucks for a second, old fashioned gearbox’s & slower, louder engines on chassis that offered all the comfort of a wooden cart. By contrast modern trucks are mobile palace’s that waft the driver along in slickly suspended air conditioned comfort, shifting gear is done automatically for you & the steering is more like a modern car than a cart. Question is though, is driving one a long way as much of an adventure as back in the day?

Bikes are the same too.

Riding a modern tourer a long way is easy & of course great fun. The technology is good but if it makes it easy to ride fast (& so you often do) – is that always a good thing?

Won’t it eventually mean automatically travelling long distances at high speed? How will you see anything? How will you experience real adventure if your just moving at speed from A to B & everything between is a blur? Isn’t that dangerous? Won’t that become a little boring?

Small single cylinder bikes are known for delivering big fun in small doses – but can they cope with big distances?

This month an intrepid group of 11 rode 1288 miles in four days & 9 of us where on single cylinder bikes all around 500cc. And what a great trip it was! It was great because riding those little bikes all that way made us all feel like kids again! Our average age worked out to be very late forties & between us there isn’t a continent we haven’t ridden on & barely a brand of big bike that hasn’t been owned by at least one of us yet it was this trip on these bikes that we all agreed we enjoyed the most. “The most fun I’ve ever had on two wheels” is just one quote. 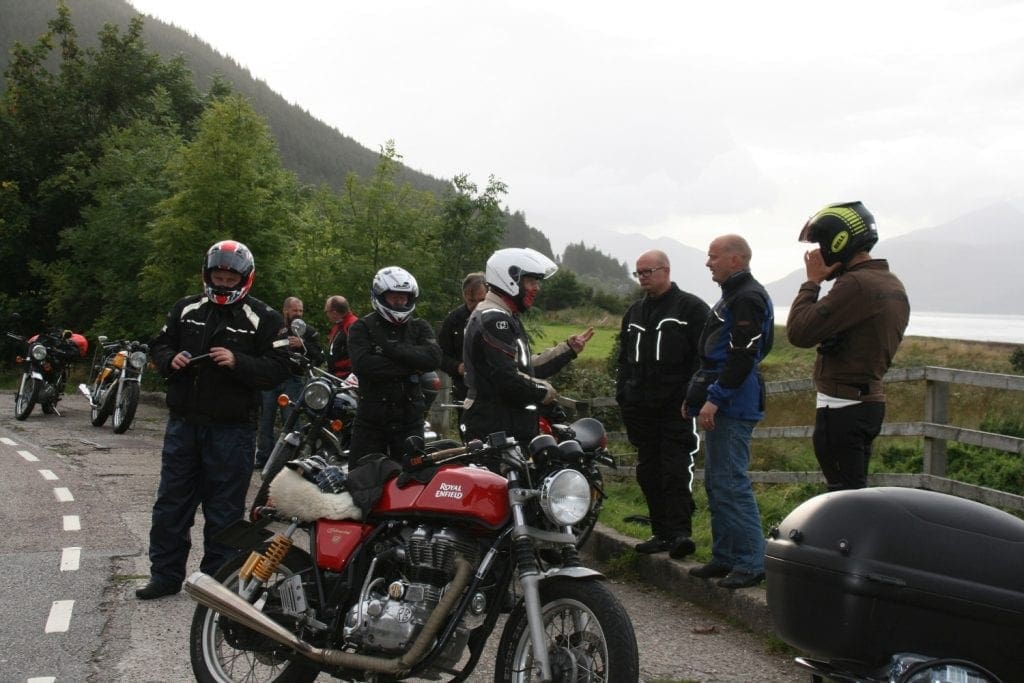 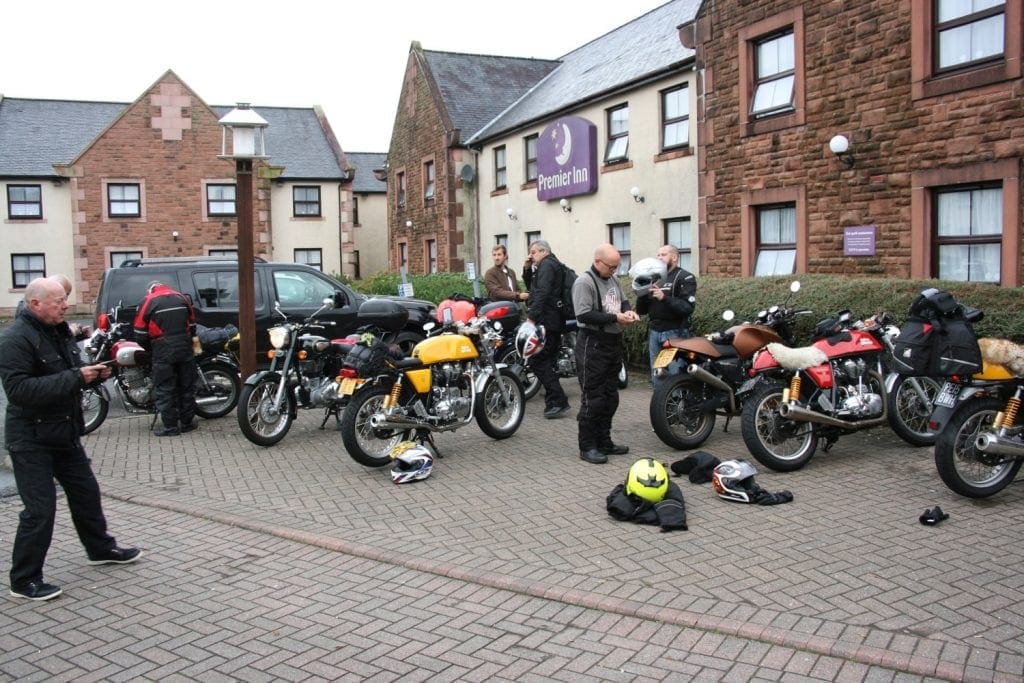 Our trip started at Cooperb M’cycles Ltd in Easton Maudit Northants & took us all the way to Ardnamurchan which is the most western point in main land Britain & back. None of the route was direct & most of it was by the best & most twisty A & B roads on the map.

Some of the roads were so tight that it doesn’t take much to close them. However, in rural Scotland – even the detours are great fun!

We used two ferries & passed through tiny hamlets & along the edge of the West coast so close to the sea that we could smell the beach for hours on end. We used B roads so remote we were chased by dogs, scowled at by huge cows, leapt at by sheep & ignored by goats. We rode through torrential rain on day one & through gale force winds on the last day (Otherwise the weather was great!) We dodged gravel and diesel on the road took in some of the finest views on the planet & loved every minute.

The mix of bikes was pretty good too. There was 4 Royal Enfield Continental GT’s, 2 Bullets & a Woodsman. There was a new SWM 445 Café Racer & a Mash Roadstar. Our 9 single cylinders where joined on the way up by a BMW R1200R & a Triumph Tiger.

What was interesting was the inevitable comparing of the Continental GT & the SWM as they are both Café Racers. For pottering around there was not much between them, similar riding position & so on. However, when ridden more enthusiastically we found that performance wise, the SWM was faster than the standard GT’s and a match for the two GT’s that had the full hot up kits fitted (– but not really any quicker.) Any slight advantage in outright top speed was irrelevant due the GT’s better use of its gearbox, it seems to be able to hold on to its gears for longer before needing to change up. Ride wise the handling is evenly matched & both bikes love to ridden hard but comfort wise the SWM definitely has a better standard seat. One of the GT’s had a deluxe gel seat which was superb! When the rain fell, the block tread pattern of the SWM’s tyres which look like actual full wets where a joy. Stable & full of confidence this bike danced from puddle to puddle & laughed in the face of standing water & wet white lines. Interestingly, one of the GT’s also faired well in the wet on Michelin’s – but the bikes shod with the standard Pirellis where not quite as happy. An easy way to improve the GT for year round riding is swapping the tyres we decided.

Most agreed the GT looked more traditional & sounded way better too. Whether traditional looks are better is down to personal taste but the GT certainly turned more heads & although the SWM is still a very pretty bike it didn’t provoke the response the GT did from random passers by.

Winner of this was close but as the GT is a Royal Enfield it means you can change or fine tune just about all of it & that swings our vote that way. If you want unlimited fun, something beautiful to look at & a never ending Christmas gift list – buy the GT. It’s a hoot.

If you just want to be different then maybe the SWM is well worth a look.

Equally, comparing the RE Bullets to the Mash was always going to happen. This though was not such a close fight.

The Mash never felt great. It was a lot more at home when the pace dropped to ‘bimble’ mode and it was dry. But over 65 MPH it often seemed to be struggling to keep up. Handling in the dry was OK but not great but then in the rain felt very nervous. It doesn’t sound as good as a Bullet either. Again the choice of accessories for the Bullet is endless & one of ours has a sports pipe which sounded great! The Woodsman is also basically a Bullet wearing an accessory kit that dresses the bike as a trail bike. This also makes you feel (& no doubt look) just like Steve McQueen!

The Bullets seemed happy at 70 MPH & will see 75 to overtake even 80 + eventually given some time. The handling is sweet & you can do some pretty serious “bend swinging” (as it’s most enthusiastic rider called it) & in all the bike amazed its owners with just how good it was. Given that all the bikes did the entire journey fully laden, the pace was quite hot & the Bullets where surprisingly good as “Sports tourers”

One of the Bullets was ridden by a young Australian who joined us for the ride before continuing his ride to home through Northern Europe, Russia, Mongolia & possible China. He said it was an easy decision to choose the Bullet for this trip. After seeing him ride the thing I’ve no doubt he will love every mile!

When it comes to looks the Bullet wins here too, although the Mash takes its styling from a different decade – fact is it’s a copy. It’s pretty & so I guess that makes it a good copy but the Bullet is the genuine article. In fact, it’s the world’s oldest constantly produced motorcycle! Like the SWM, the Mash is certainly different, but the Bullet makes you go a little gooey when you see it, even if you don’t like bikes- it will make you think & in terms of ride it does knock spots off the Mash. Easily – the Bullet wins.

So the most interesting comparison comes last. How did the singles compare to the big Triumph & BMW?

Obviously the big bikes had loads more power & much bigger seats for a start. Performance wise, there is no competition – on paper at least. But the truth is through the B roads neither could keep up with the RE GT’s or the SWM. When the silly stick was properly shaken they were just too big & heavy to match the pace. Only when the roads opened out brute force was able to blast them along a straight back on the coat tails of the flying singles. Of course on the bigger open roads where they had room & time to pass on the gas (& when they could maintain 3 figure speeds) – they were gone.

But here’s the rub, 3 figure speeds are illegal, and yer Mum wouldn’t like it! If you come back from a blast on singles with us during which we didn’t exceed 90 MPH it almost sounds saintly – AND it’s more fun. There were times during that trip when the pointy end of the group went off for 20 minutes of sillyness, this more resembled a Moto 2 race than a group of middle aged men touring. Yet if we had been on big bikes capable of much higher speeds we probably would have had even more sessions of sillyness that would have been easier & so lasted for say 30 minutes. Over the entire trip that’s a lot more time spent pushing your luck.

The other thing we agreed was that it is ONLY these back to basic bikes than deliver back to basic thrills. Riding these bikes takes you straight back to your youth & you feel more enthusiastic & more invigorated than on any other bike. You’re riding with pals rather than associates and having banter rather than conversations – all delivered straight from the enthusiasm generated by such endearing machines.

So yes we could have done this trip on Adventure bikes, Tourer’s or even Sports bikes. But we all agreed that this was better. Not quite as comfortable – but safer, more fun & way more memorable on the singles.

Already plans are in place to do it again on the same bikes next year. I don’t know if I will be able to go or not, I hope I can as I really don’t want to miss it. One thing I do know for sure is that this journey will be measured by memories & you don’t need a rider modes or even a digital trip meter for that! 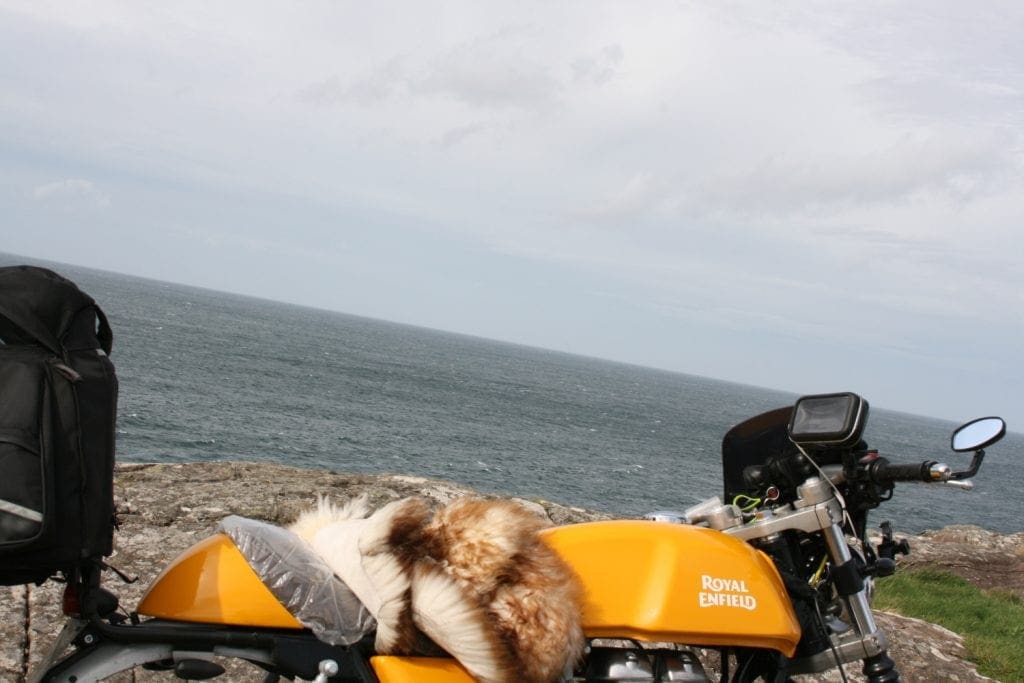 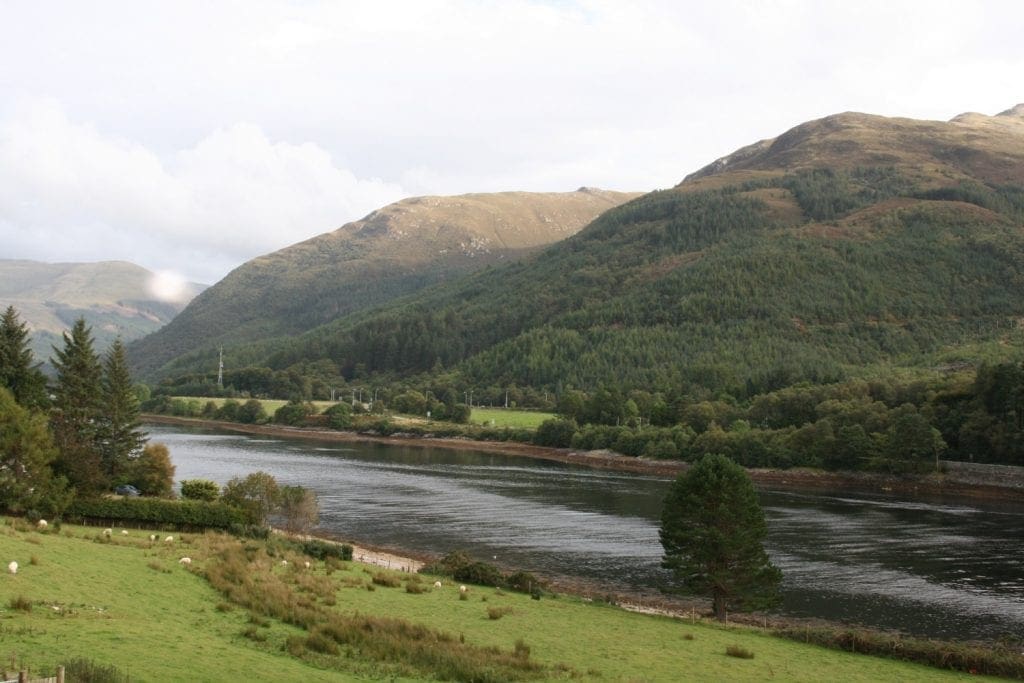