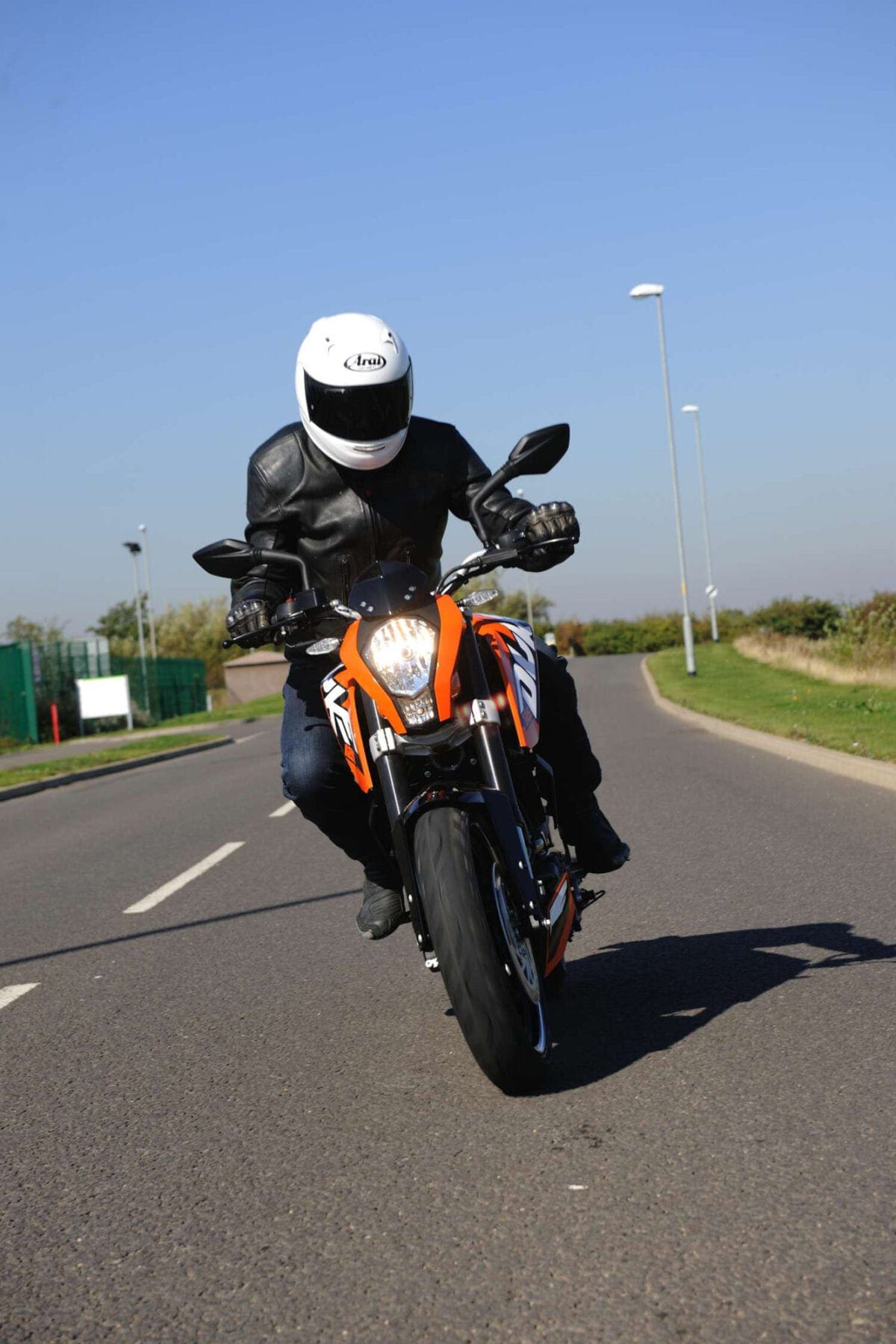 There are seven essential controls for making a motorcycle do what you want it to. Throttle, clutch, gearlever, front brake, back brake, handlebars and body weight. The first five are there to make it go and stop, the sixth one keeps it stable and helps it go around corners and the last one makes the difference between fun and fear.

Twist to go faster. Simple huh? Er, not quite. Believe the Hollywood fantasy and riding a bike involves using the throttle like you were wringing out a dishcloth. The reality is slightly different. Gentle and controlled is best – like twisting the dials while opening a safe. A bike throttle does many things. It accelerates us to our chosen speed, maintains that speed and gives us the extra oomph to overtake. But it also matches engine speed to wheel speed when we give it a blip while changing down a gear. Doing this lets the gear snick into place like a knife through butter. And closing the throttle gives us engine braking to help slow the bike down – which is especially useful when filtering through traffic – controlling speed with the engine, not the brakes. 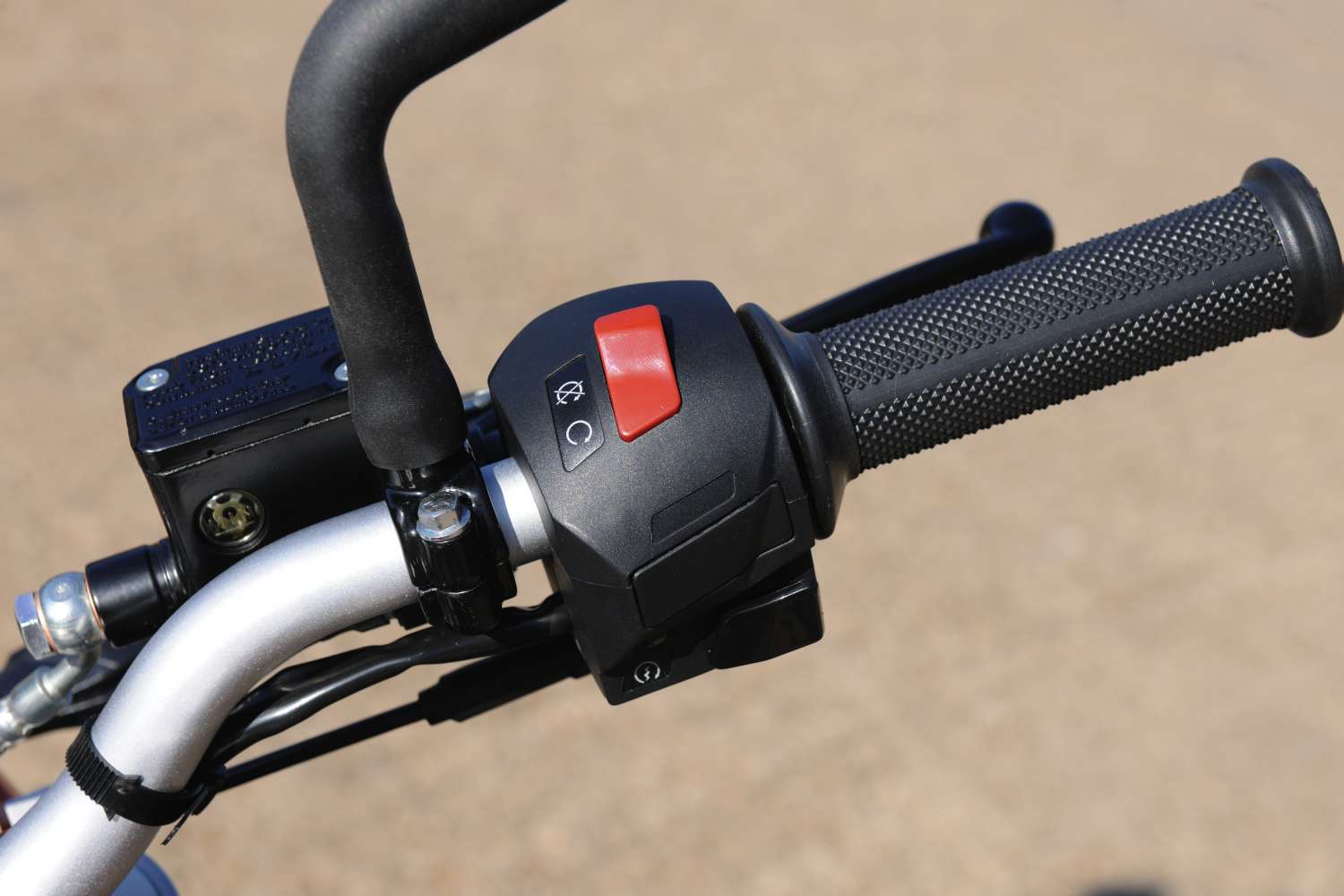 Clutch control (left hand lever) gives the smoothest and quickest getaways. Set the engine speed, feed out the lever and feel that silky smooth acceleration. The perfect clutch timing makes every gear change a thrill. But there’s more. On a bike the clutch is also a secondary, fine control for the throttle. Especially useful when filtering through traffic. A gently feathered clutch in combination with the throttle maintains smooth, graceful progress, calmly allowing the rider to look for potential hazards knowing that they can pull up in an instant with a quick snatch of clutch lever and gentle braking.

For novice riders the clutch is also the safety lever. A little too much throttle sir? Bike on the back wheel with sir running behind it? Just pull in the clutch and everything will be fine. Again. 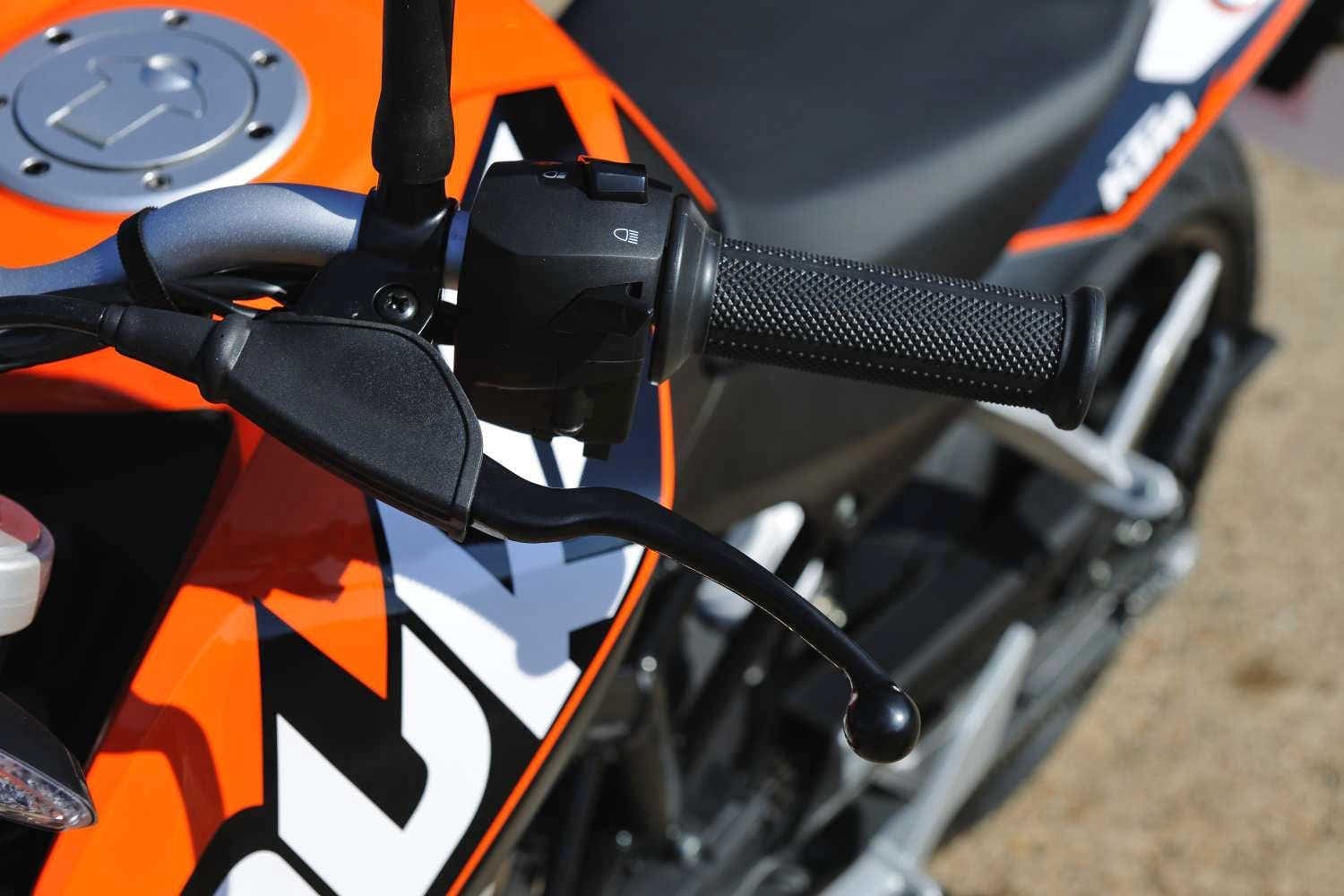 Couldn’t be easier. Press left foot down for first, lift up for the rest. Being in the right gear defines great riding. The right gear gives instant power for overtaking, extra braking into corners and smooth drive out of them. The right gear makes riding through traffic safe and confident, makes your suspension feel taut and ready for anything.

Car drivers are taught to get into top as quickly as possible and stay there for as long as they can. Motorcyclists learn that being in the right gear makes cornering a pleasure and, on that one occasion when something goes wrong and you need a sharp burst of brisk acceleration, it might save your skin. 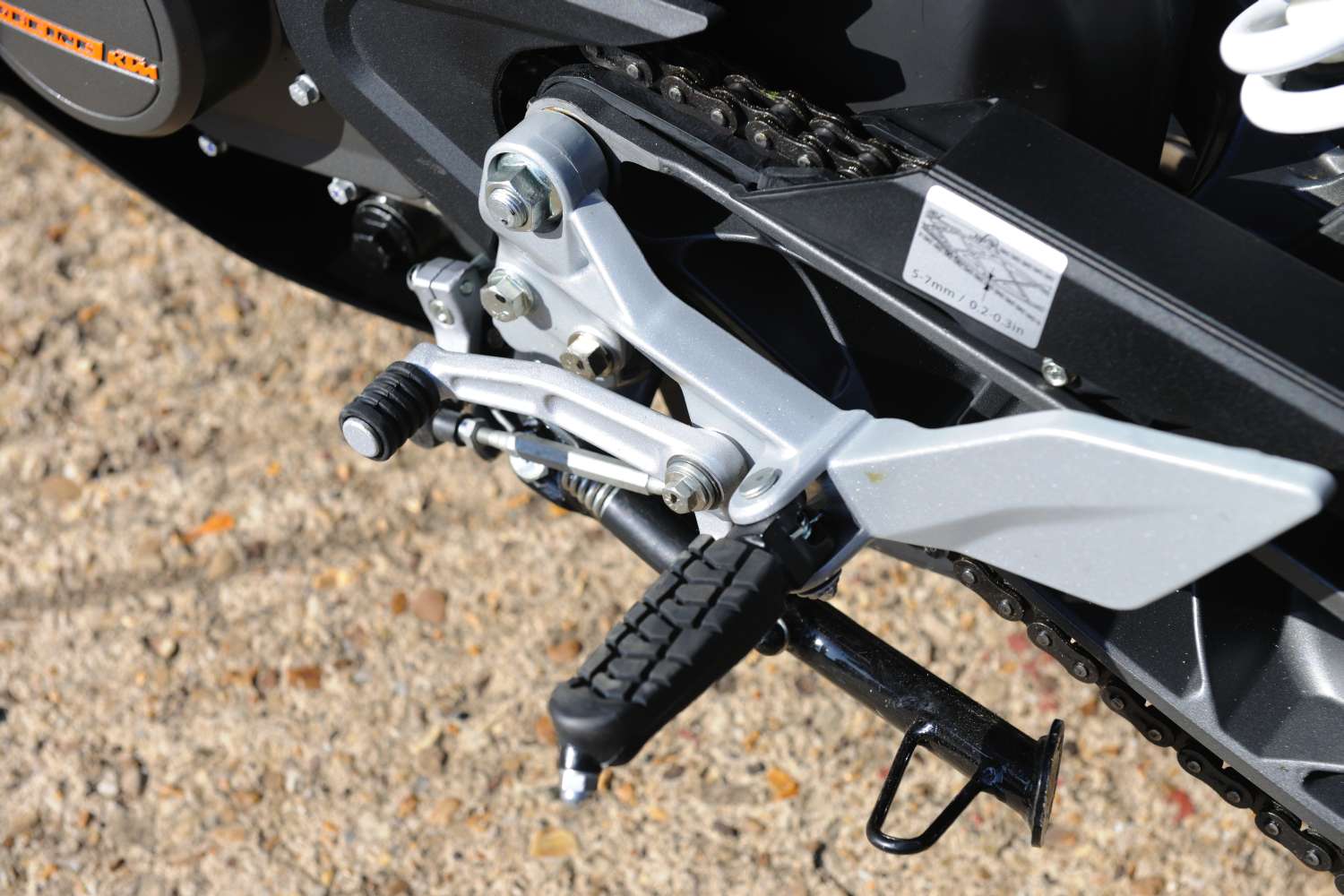 Hands up, who’s scared of using the front brake (right hand lever) hard? Hmm. Thought so. The problem is that we use our brakes based on experience gained from push bikes. Grab a handful of front on a bicycle and chances are you’ll be laid on the floor with a pedal in your ear. Motorbikes aren’t like that. They have much more suspension travel and the rake of the frame – the angle of the front forks to the frame – is shallower, which makes it less likely that the bike will flip over. The strangest thing to get used to about riding a motorcycle for the first time is the weight transfer when you accelerate and brake. Put simply, opening the throttle transfers weight onto the back wheel, giving more grip for acceleration. While braking hard puts more weight onto the front wheel giving much more grip to the front tyre. It feels weird at first, then you get used to it Use the front brake properly and you’ll discover immense stopping power, but the secret, like so much in good motorcycling, is being smooth. Modern motorcycle tyres are very, very grippy – even in the wet. But you have to give them chance to work and the secret of good front braking is managing the initial transfer of weight onto the front tyre.

Grab aggressively at the front brake lever and the most likely thing to happen is that you’ll lock the front wheel, which will shortly be followed by some sparks, some pain, a large bill and half a dozen family members saying, ‘we told you it was dangerous’. They are wrong. The trick is to apply the front brake gradually for the first split second to allow the suspension to transfer the weight onto the front tyre. Then increase the pressure on the lever smoothly but firmly. Don’t forget to shut the throttle while you’re braking and also to go down the gears as you do this – engine braking makes up a significant proportion of the stopping power of a motorcycle. Many motorcyclists (especially racers and sports bike riders) hardly use the back brake (right hand foot pedal). Their argument is that proper use of the front brake means the rear wheel has minimal contact with the ground and therefore, hardly any effect on stopping distance. Plus, using the back brake when the rear wheel is lifting is likely to lock the rear wheel. There is some truth in this. Under extreme braking the slowing effect of the back brake may only be 10% of total stopping power, but 10% is better than nothing and might just make the difference between hitting the car that just pulled out in front of you or missing it.

So the back brake is important, but you need to use it gently to avoid locking the wheel. Most trainers recommend a split of 70/30 between front and back brake, changing to 50/50 in the wet.

But the rear brake has other uses. Riding in town, for example. Filtering through the traffic needs careful control of throttle and clutch to control your speed as you nip through the gaps. So the rear brake allows you to add fine control of your speed without having to juggle throttle and front brake, which can make the ride jerky and harder to control.Also, adding a gentle dab of back brake adds stability to a bike when performing low-speed manoeuvres. U-turns become much more controlled with a touch of back brake. Handlebars – the magical world of counter-steering

Steering a bike is simple huh? Yes, but it’s not like riding a push bike. At anything above walking speeds you actually steer a motorbike by a process called counter-steering. To make the bike turn left you actually push gently on the left-hand handlebar. This turns the front wheel to the right ever so slightly. Which sounds crazy, but it works, because, above walking pace, in a weird turn of physics, as the front wheel turns right slightly, it actually makes the bike begin to fall to the left. I’m sure that nice Mr Newton could explain it but unfortunately he was more interested in Cox’s Pippins than cornering. All it takes is a nudge to get it going and then you stop pushing and relax your grip on the bars. So, the bike is now leaning gently to the left and will continue to trace that arc around the corner until you lift it up again, by either applying the throttle gently or giving a gentle nudge to the right-hand handlebar. 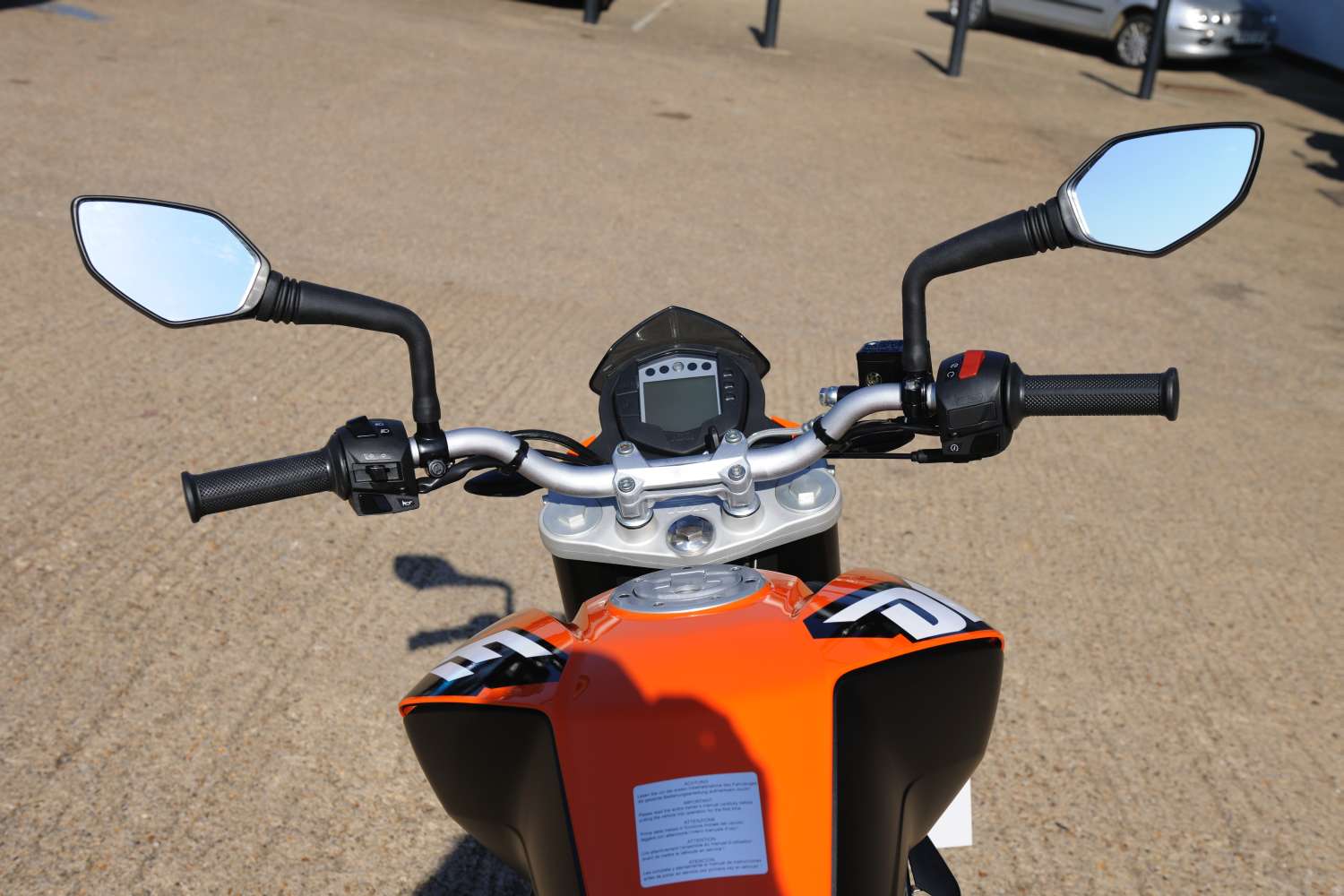 Shifting body weight and applying pressure to the footrests in a corner makes a huge difference to the way a motorcycle steers and the confidence you feel while doing it.

Moving a bum cheek off the inside of the saddle in a corner makes the bike turn more easily because it lowers the centre of gravity and moves your inside shoulder forwards which gently adds pressure to the inside handlebar. Putting pressure on the inside footrest also helps. Once the bike is leant over, adding pressure to the outside footrest makes it feel more stable. All these moves are subtle and smoothly done but they add a huge amount of confidence to your cornering. 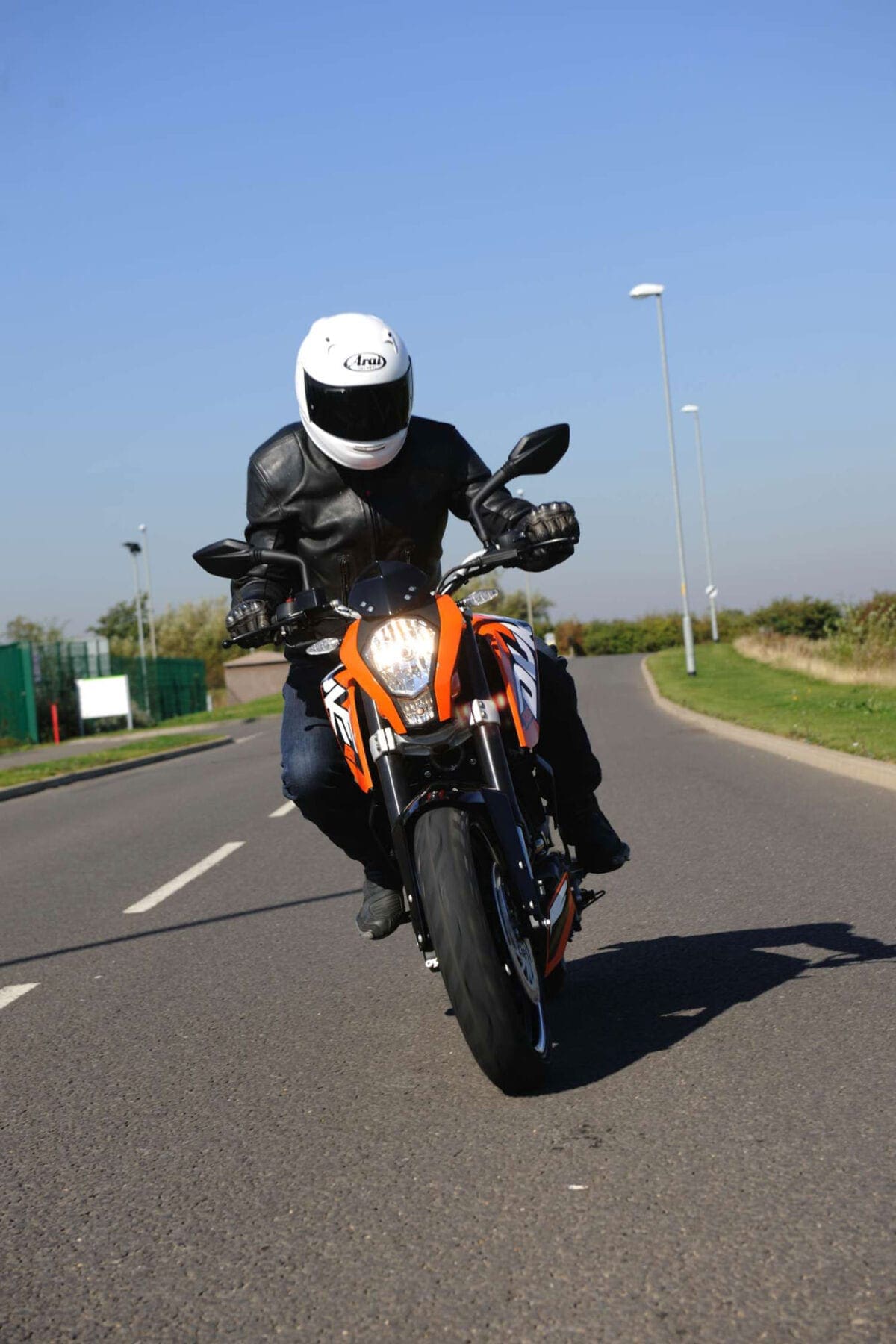 Some of them are obvious. The horn button honks the horn for example (although most motorcycle horns are so feeble they are more likely to invoke laughter than anything else). Indicator switch, ditto, but to cancel the indicator you push the switch. Most modern bikes have the headlight permanently switched on but you’ll still get a switch for high and low beam and a separate one for flashing. On the right side switchgear you’ll find the starter button – self explanatory – and an engine kill switch. This cuts the power from the ignition coils to the spark plugs so the engine won’t run and it is there to allow your bike to be switched off quickly in the event of an accident or emergency without taking your hand off the handlebars.

The ignition switch has a couple of extra functions too. Firstly, with the handlebars turned to the left, push down on the ignition key and turn it anti-clockwise. This will lock the steering on most bikes to prevent it being ridden away. Turn the key another click anticlockwise and this will switch on the parking lights. 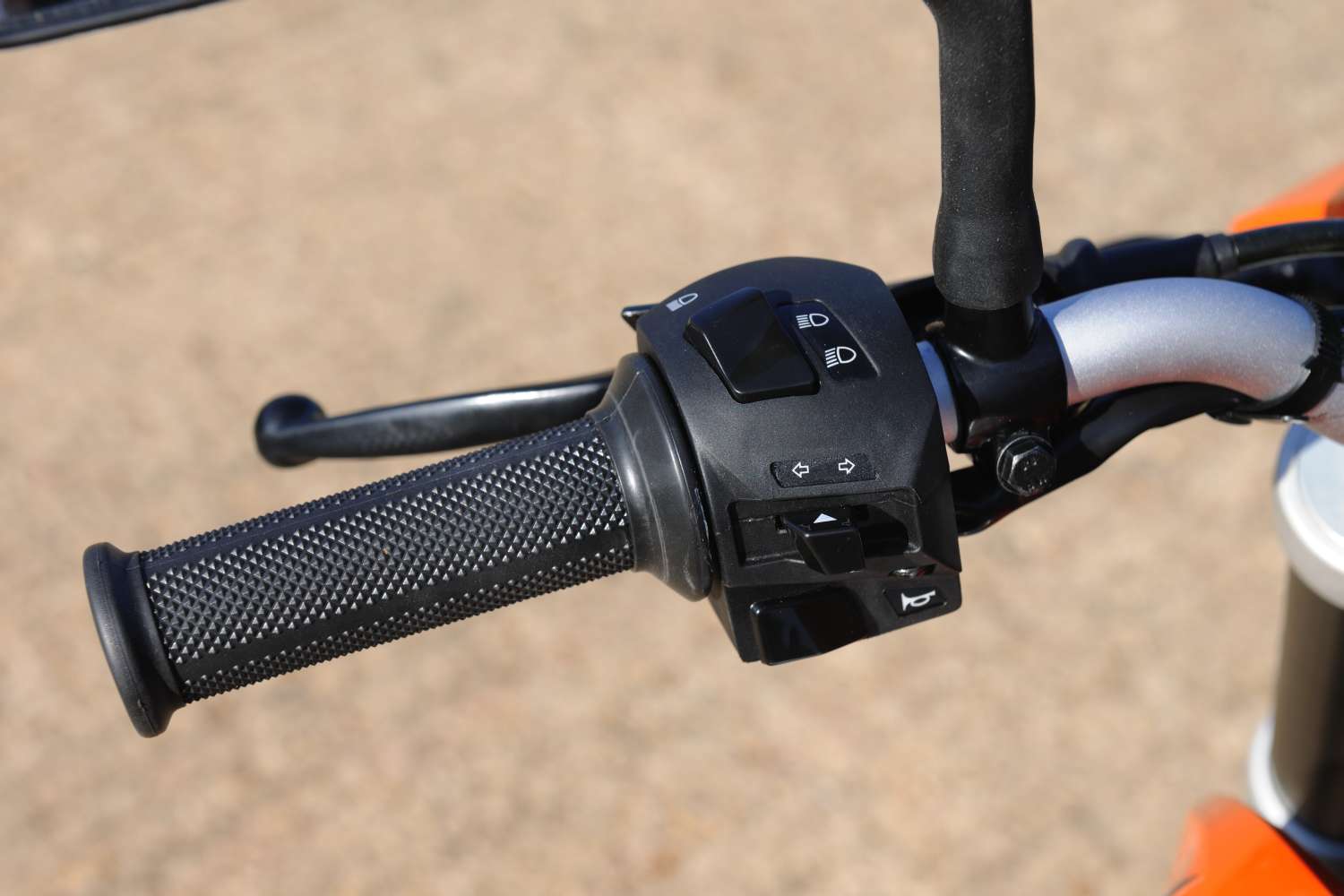