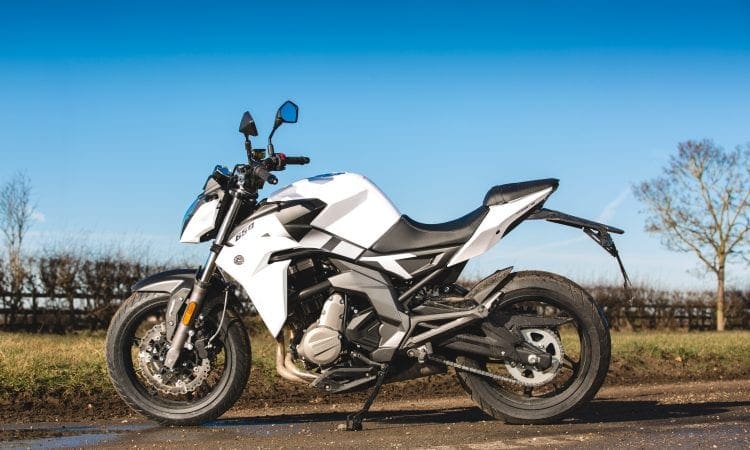 More bang for your buck with WK’s KTM-inspired naked

Motorcycles manufactured in China are often dismissed as bargain-basement reproductions of existing models from Europe and Japan. But as each year passes, that statement appears further and further from the truth – and with over 50% of the world’s motorcycles now built there, China is well on its way to cementing its place as a real force in the world of motorcycling.

Historically, machines produced in China have been small capacity scooters and learner bikes built for the commuter market. But, back in 2012, the all-new WK 650i marked a move towards larger capacity Chinese machines, and was widely acknowledged as a big, big step forward by the industry at large – and with a raft of updates for 2017, to bring it in line with Euro 4 regulations, the WK 650 is better than ever.

The more observant among you will have spotted the CFMoto branding adorning the WK 650NK. That’s because WK now import the bikes direct from CFMoto in China. If you’ve not heard of CFMoto before – the Chinese brand build a staggering 80,000 vehicles per year, 40,000 of which are bikes. It’s also worth mentioning that CFMoto have a very strong working relationship with KTM – in fact, the 650NK was created with the help of Kiska Design, who have worked on almost all KTM models for the past 20-years – while CFMoto actually produce small capacity KTM Duke’s for the Chinese market. And looking closely at the 650NK, I’m sure you’ve spotted more than a passing resemblance to its Austrian cousins.

And to further emphasise their commitment to development, CFMoto is providing factory support for the WK Bikes race team at the Isle of Man TT. Evidently, CFMoto is in for the long haul.

The 650NK is undoubtedly a good looking machine, with all the right bits in the right places. Of course, it is still a ‘budget’ Chinese motorcycle, so some components have been cheaply made. But ultimately, there’s no way you’d be able to get your hands on a brand-new top specification Japanese or European machine for the same kind of money as the WK.

Throwing my leg over the NK for the first time, I immediately noticed its accessible seat height. Standing at just 795mm, I could get both my feet flat on the floor with room to spare (though I am 6ft 2” with a 34” inside leg) – and once out on the road, I found it deceptively roomy for its size. And, despite its sporty physique, the riding position is surprisingly neutral and offers an upright, authoritative view of the road. The switchgear is basic but easy to use, the dash is neat and mirrors are well positioned. It’s weighs in at 206kg – which isn’t exactly lightweight for a bike this size – but out on the road, the weight is balanced and distributed so well, that you’ll only notice it once you’re off the bike.

Personally, I reckon this bike would most appeal to a younger, learner rider – with its sharp bodywork, new muffler, indicators, dash, lights and low cut seat helping to emphasise its aggressive appearance. Equally, if you’re on a budget, and are looking for a confidence-inspiring ride, you could do a lot worse than the new WK 650NK.

First things first, let’s take a look at the WK’s powerplant. Essentially it’s a Chinese rip-off of the Kawasaki ER6 motor, right down to its dimensions. More specifically, it’s a liquid-cooled 649cc DOHC eight-valve parallel-twin motor, which is claimed to kick out around 69.73bhp at 8,500rpm and around 45.72 lb-ft of torque at 7,000rpm – and matches the output of its outgoing Euro 3 machine.

In practice, the 650NK offers plenty of usable midrange grunt, thanks to its torquey, free-revving and smooth parallel-twin engine. You’ll easily get the jump on traffic, and with a linear build of power all the way to its 10,500rpm limiter, you shouldn’t have any problem with overtakes, even at motorway speeds. It’ll happily potter through town, cruise all day at 75mph, and will have no problem topping a ton. Inevitably, things do get a little stressed when you’re pushing the NK that hard – with a bit of vibration coming from the parallel twin engine, which slightly blurs the image in its mirrors. But, with torque peaking at 7,000 rpm its wide spread of power, there’s no real point in revving it anywhere near its 10,500rpm limiter though – and in most real world riding, I doubt you’ll encounter any serious vibration.

There’s a choice between two different riding modes. The ‘Economy’ map works to soften power delivery and improve fuel efficiency, while the ‘Sports’ map offers unbridled access to the 650NK’s full range of power. I have to confess; I spent most of my time riding in poor weather, on sopping wet roads, and didn’t notice a dramatic difference between the Sport and Eco modes also on offer – but I’d welcome another opportunity to try them out in more favourable conditions.

For braking, the NK comes equipped with Spanish J.Juan calipers biting twin 300mm discs up front, and a single 240mm disc at the rear. And to bring it in line with Euro 4 regulations, it’s equipped with Continental ABS too. I tested the ABS out by attempting to lock the front end, and found it to work a treat – keeping me upright with barely a second thought. My only real criticism is the amount of feel from the front brake lever. The amount of lever travel is a little excessive, with limited feel on offer (though I was riding a relatively new machine, ahead of its first 500 mile service, so maybe it’ll settle in time). Regardless, I found the brakes performed well, stopping me quickly and smoothly, in even the worst of conditions.

For suspension, the NK is fitted with KYB front forks and a KYB rear shock, with adjustable rebound and pre-load. While it’s not the most refined system, the steering is predictable and the suspension is more than up to the job – performing well in the city and out on the open road. For more spirited riding, I’d like it to be slightly stiffer – but considering its price, it’s an impressive set-up as standard.

Tyres are upgraded too, with Metzeler Roadtec Z8’s adorning the 17-inch wheels front and rear – and honestly, they’re brilliant. They give good feel and wet weather grip and help to make the WK 650NK a capable cornering machine, no matter the weather.

The updated WK 650NK represents exceptional bang for your buck. It’s as capable as any motorcycle costing twice the price – and with Metzeler tyres, a Bosch ECU, Continental ABS and J.Juan brakes fitted as standard – it looks as though WK/CFMoto is just as interested in quality as it is in price.

In short, the 650NK has good bones – with its mechanical grip and basic, confidence-inspiring geometry. Ok, so it’s not the most refined machine on the market – but the necessary compromise between function, quality and price is bang on the money.  Just how well it’ll wear the passage of time is yet to be proven, but providing you take good care of it, with regular servicing and maintenance – I’m sure it’ll hold up.

At £4499.00 on the road, the WK 650NK offers incredible value for money – and if you’re in the market for a capable all-rounder, that’s just as happy on the daily commute as it is tearing up some the tarmac, I’d recommend you test ride the updated NK. I loved it.