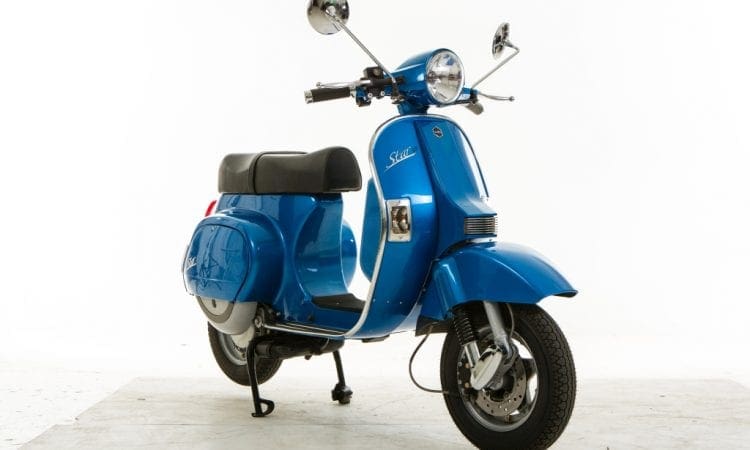 You’ve passed your CBT and now you’re ready to get your hands on a new ride and get out on the road. Most of us don’t have an unlimited budget to play with, so to help you undertake the difficult task of picking your next steed, Ross has handpicked a few small capacity retro-styled bikes and scooters to show just what is available for £2500. 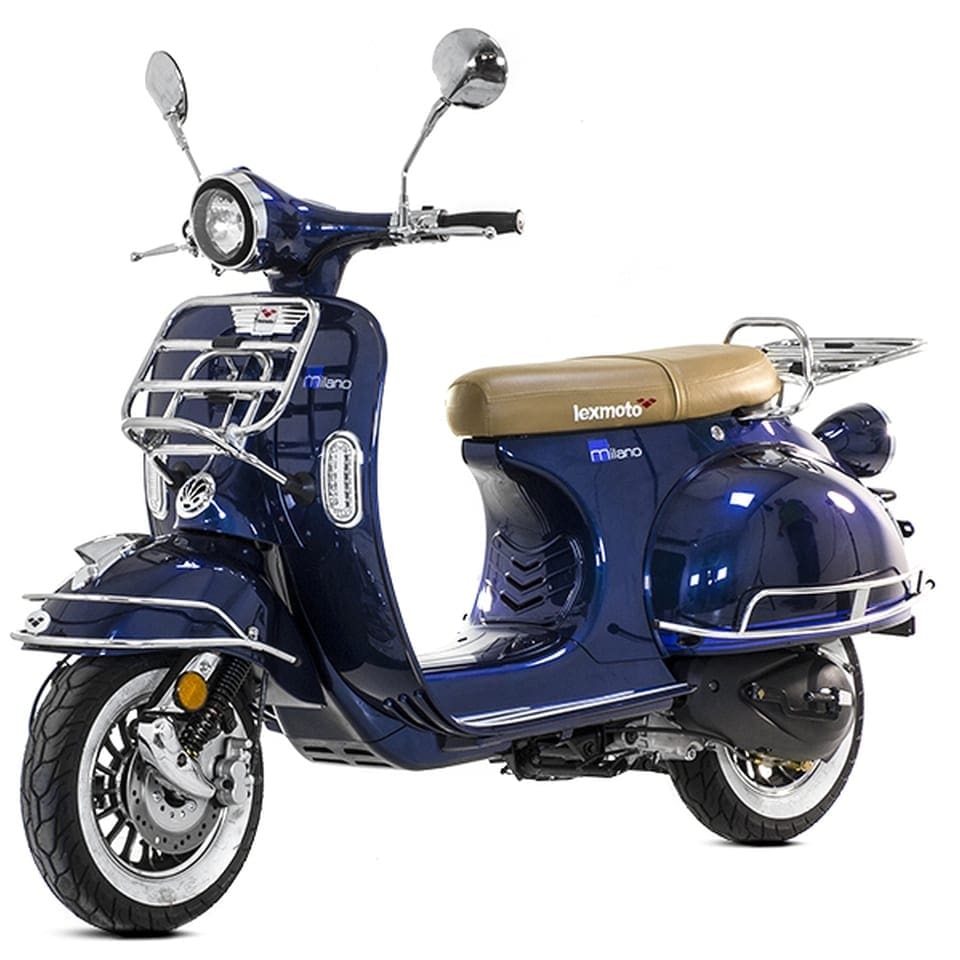 There’s no denying that the Lexmoto Milano is a good looking machine – its retro styling inspired by the iconic Italian scooters of the 1960’s. The Lexmoto Milano has a single cylinder, four-stroke, air-cooled, automatic engine that kicks out (a claimed) 2kw of power, 2.7nm of torque and is capable of reaching a top speed of around 28mph – so it’s perfect for roaming around towns or cities (but probably not much more, with comfort). Plus, it weighs just 86kg, so should be super easy to manoeuvre.

The twist and go scooter has an electric and kick-start, a fuel capacity of five litres and is capable of achieving in excess of 120mpg (according to Lexmoto). As you’d expect, it features front and rear hand brakes, front and rear lights, LED indicators, a simple and straightforward analogue dash and underseat storage.

The Milano is available in three schemes – Blue, Black or White and there’s an option to choose a Tan coloured seat too. 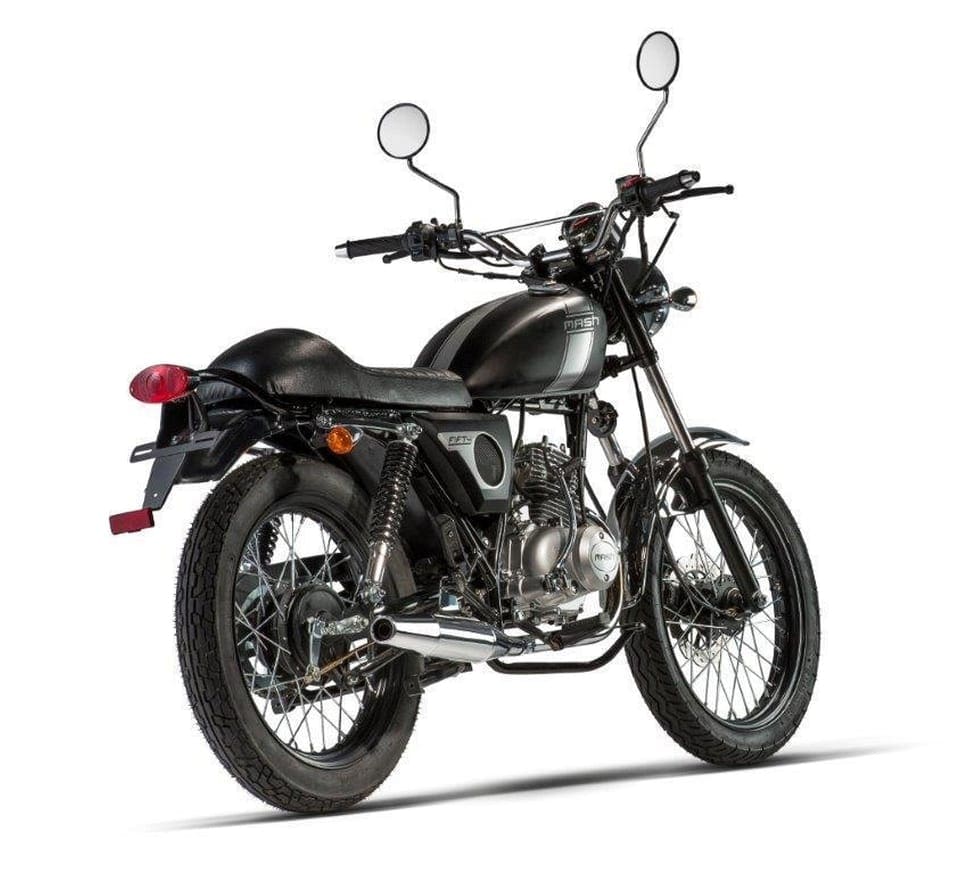 Mash Motorcycles are one of the newer bike brands to emerge on the market, and since their introduction in 2015 the French brand have cemented their place as a popular choice for motorcyclists looking for a retro-styled geared bike on a budget.

The Mash RoadStar 50 is imported from China, tweaked in France – and then finally makes it across to British shores packaged as a 1970s inspired, four-stroke, air-cooled single, with a four speed gearbox capable of reaching up to 45-50mph (so it’s .

It’s a good size 50cc too (as big as an average 125), yet only weighs in at 90kg. It is equipped with an electric and kick-start, has generous 18” wheels, (a pretty basic, but more than capable) modern wavy disc brake and a fuel capacity of 12 litres.

50cc geared bikes are a bit of a rarity on UK roads, with many new riders on CBT certificates opting for 50cc scooters – but this Mash RoadStar is the surely worth checking out, no matter whether you’re a learner, a commuter, or you’re looking for something stylish to ride about on at the weekends. It’s available in either Matt Black or Monza Red. 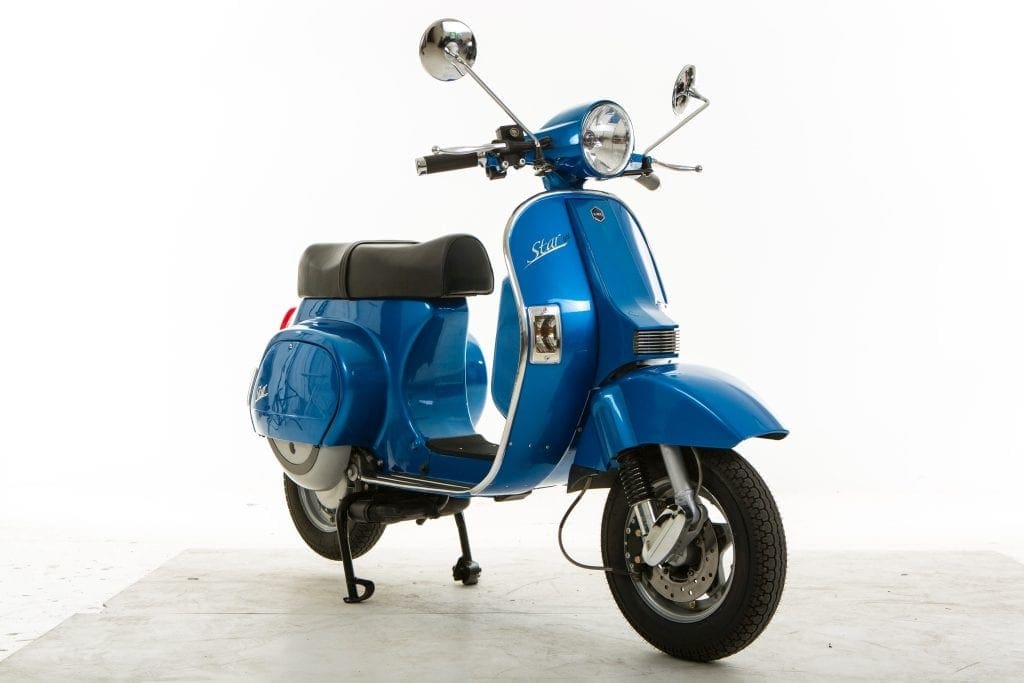 Made in India, styled in Italy and sold in the UK, the LML Star Lite 125 is undoubtedly a really great-looking, small framed, retro scooter, with styling inspired by the classic Vespa PX and proper pressed steel bodywork (LML actually used to build Vespa’s under licence for the Indian market, so they know what they’re doing). Unlike the Vespa, there’s no footbrake, the hand gear change is missing and the clutch lever has been replaced by a rear brake. Modern (or new) scooter riders will find the LML pretty straightforward though – it’s two brake levers and a throttle, a four-stroke automatic engine and all the usual controls you’d expect.

The scooter has a simple two valve, single overhead camshaft engine built from scratch by LML, meeting Euro 3 standards and kicking out a claimed 9.1bhp and 8.7nm of torque and fuel economy of about 108 mpg (which all sounds pretty impressive) – and to stop you, there’s pretty standard front disc and drum brakes. The LML weighs 103kg, has a seven litre fuel tank, electric-start (and a kick-start too as a back-up), a fuel gauge and straightforward digital dash.

Sadly there’s no storage space under the seat, as that’s where the fuel tank lives, but there is small lockable glovebox and plenty of room to hang luggage – and as the scooter shares the same basic frame as a Vespa there are also plenty of accessories to buy, from rear racks to spare wheel carriers.

It is available in a wide range of colours including, White, Electric Blue, Milano Red, Black/gold, Ivory, Azure Blue and Metallic Red. 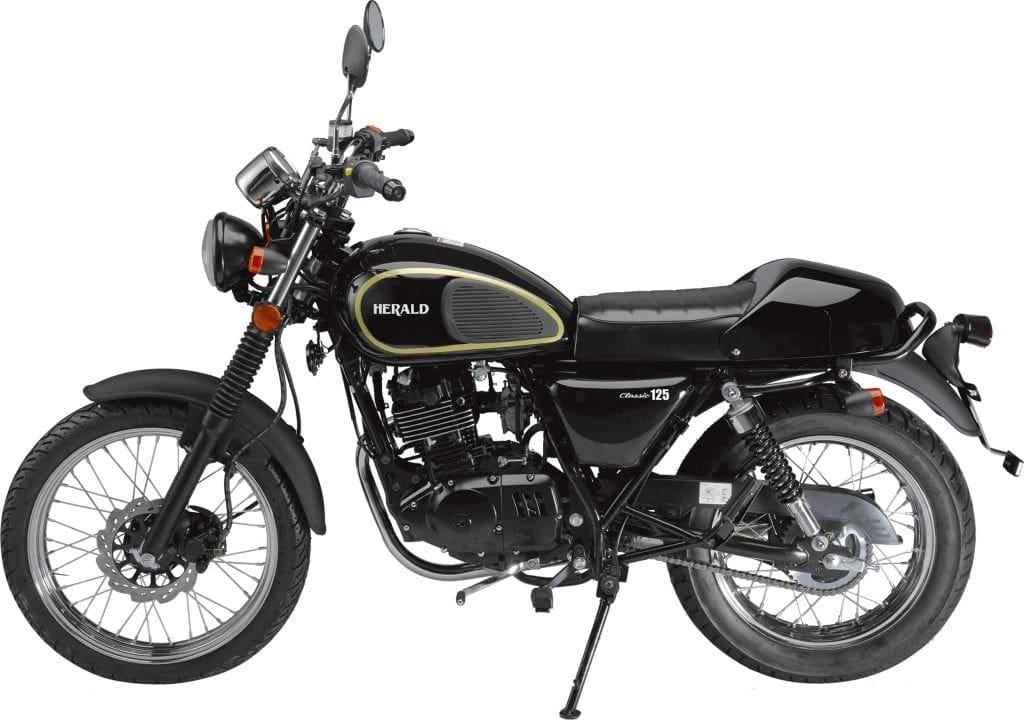 If you’re after a retro-styled bike on a budget, then you could do a lot worse than considering the Classic 125 from the Herald Motor Company.

Herald’s best-selling bike from their extensive range of classic custom machines, the Classic 125, was launched in June 2012 and over the last few years has managed to cement its place as a firm favourite for new riders on a budget (and even established riders, looking for a classically-styled affordable winter hack).

Imported from China and then tweaked and improved by Herald Motor Company, there’s no denying that the Classic 125 is a good-looking bike – drawing inspiration from the Suzuki GS’s of yesteryear.

The bike features a Suzuki derived engine and 5 speed gearbox, which work together to kick out just under 11bhp and around 8.6nm of torque – allowing the bike to get up to around 70mph, so it should be comfortable in the town and city, and out on country roads too. It weighs in at 115kg, features retro-styled spoked wheels, chrome front forks (with rubber gaiters), a rear drum and front disc brake, teardrop shaped (12 litre) fuel tank, a flat seat and a peashooter exhaust. There’s also a straightforward single, chrome clock that lets you know speed, mileage and gear selection.

It’s available in either Black or Orange.