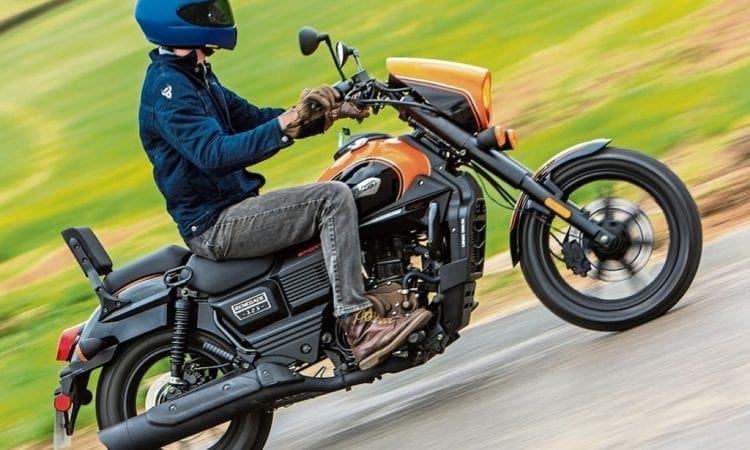 With the 125cc market full of retro café racers, tourers and sports bikes it is quite refreshing to see a small bike hold up the cruiser flag.

My first impression of the Renegade was that of excitement, it had been a while since I had ridden a bike with a cruiser stance, feet forward and arms spread, I like it, might be an age thing but no apologies for that, I like cruisers, that’s it I’ve said it now, so there!

The Renegade does not look like a small bike at all and it shouts out Americana, it even carries a US stamped stars and stripes badge on its front mudguard. Any wanna-be rock star (with only a provisional licence) would feel proud to ride this chopper-esc muscle bike whist singing Mötley Crüe songs to themselves in their helmets, whilst cruising down Sunset Strip….or Skegness seafront! It even comes in a Dukes of Hazard ‘General Lee’ orange.

The exhaust, as agricultural as it looks, does actually give out a decent sound for a small engine. The quality is there with the digital

UM declare that they have a world first with their 360-degree LED lighting system which illuminates the side of the bike as well as front and back to improve rider safety.

The part digital part analogue instrument panel is pleasing even though it is KM biased and there is no clock.

Again, with this bike I am slightly bemused that they too go to the expense of a factory fitted centre stand but then skimp on quality on some components and the finish of the paintwork, especially as the one I rode has drips in the paint on the tank.

The colour coordinated front light cowl is a nice distinguishing feature which sets the bike off and serves the overall style of the bike well.

The “World’s first 360-degree LED lighting system” has yet to convince me as although the bike is supposed to light up a full 360-degrees the side lights do not work on the bike I am testing? So that is more of a 180-degree system, which has been around for a while now, plus the headlight on full beam actually is angled better for a distress beacon, shining very high into the sky, in fact on one night time journey of 15 miles I had no less than five lorries flash me in protestation of the angle of my lights, and that was on dipped! so an obvious adjustment is required.

The bike is rigged up well for a pillion with a comfy seat, back rest and grab bars.

The five-speed gearbox is one of the smoothest and most reliable I have encountered, on any bike, let alone a 125cc.

This bike has no idea that it is a small bike, and apart from the obvious power restraints it does not feel as though you are riding a small bike, and to be fair, it will sit comfortably at 65mph without issue and it with its 18ltr fuel tank, it will do that for quite a while. The bike does get some vibration at speed but it is nothing too serious unless you have plans to ride for hundreds of miles in one go.

Its low seat height works great for those like myself that are fairly low to the ground themselves, but I think that the riding position would work with a low seat for those taller too.

The UM Renegade Sport S might not be an obvious choice for the younger new learner rider wanting something cool to ride around town on with mates but for the more mature commuter looking for comfort, style and economy then this bike will be in the top five for sure.