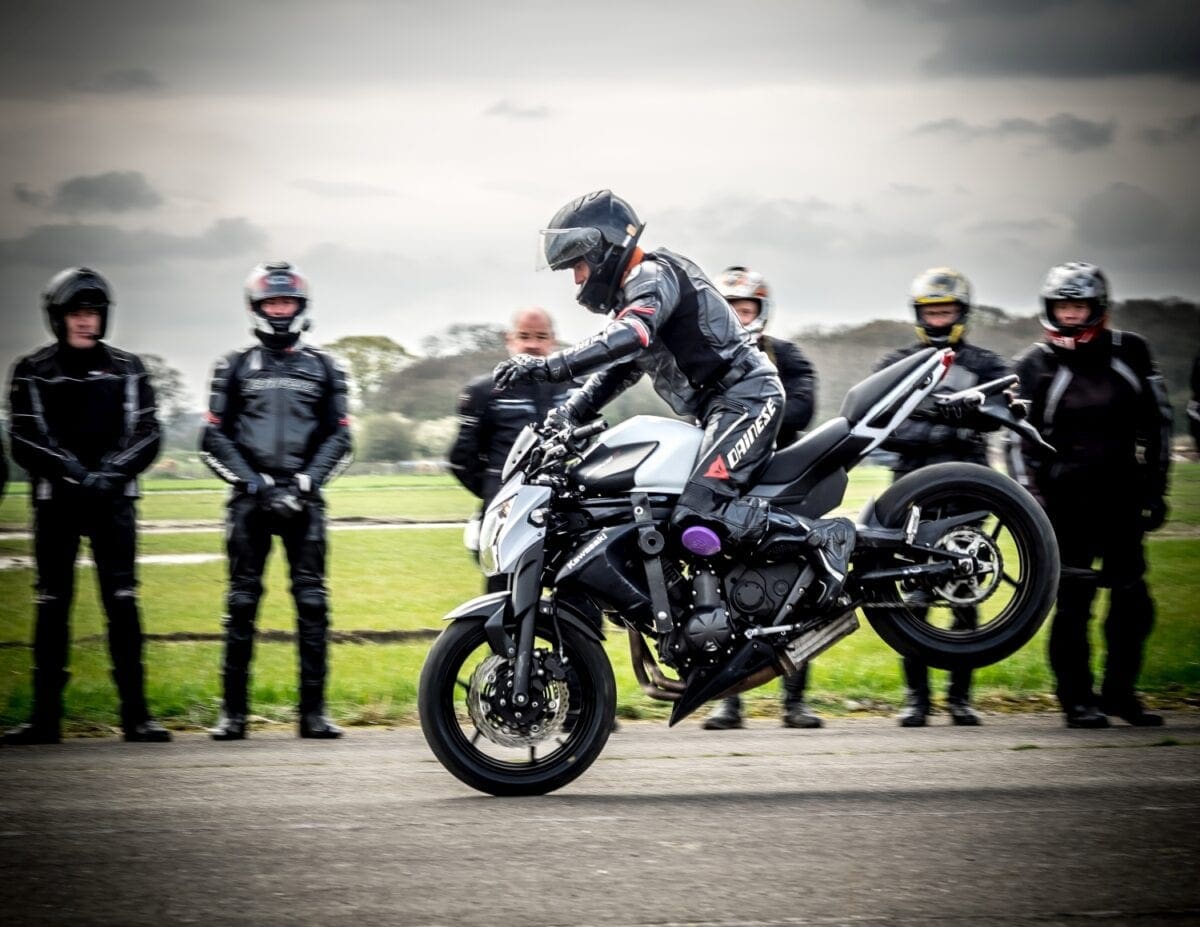 Improving your riding starts with busting the myths of motorcycle control, as Mikko has just found out…

I always thought I was a pretty competent rider. I’m not fast like some guys I ride with, or all-observant like the Police riders who can see potential hazards miles ahead. But I always felt like I had the basics covered. You know, turning, stopping, generally getting the bike to go where I wanted, that sort of thing.

But it turns out that I didn’t really have it all covered at all. Or at least, I wasn’t making things easy for myself. And that’s where the Machine Control course from the i2i Motorcycle Academy came in.

The approach of the guys at the i2i is to look at different myths or stories about motorcycle control that people have developed in their own heads (or have been told by ‘those who know’) and to see if there’s evidence to support them. It’s a combination of psychology, physics and practical exercises. What this combination does quite nicely is bust the myths about motorcycle control that have been holding people back from becoming better riders.

Back to the drawing board

On the day of the training there were a dozen of us learners gathered at the Rufforth Airfield in York, all at different stages of anxiety about what we’d let ourselves in for. Luckily our instructor Tom Killeen was quick to put our minds at rest: no part of the course was compulsory, everyone could do as much or as little as they wanted. We were simply here to pick up a few pointers to make us better riders, experimenting with how changing small things we did affected our riding, and most of all, getting rid of those myths that were holding us back.

Our group was about as varied as it could be. There were people who had been riding for years, some that had only just passed their tests, and many who were returning to biking after a break. What most of us were after was to build our confidence levels and feel more in control of our bikes whether it be cornering, slow riding or braking sharply.

You do the training on your own bike, and I was on a Kawasaki Ninja 300, an A2 licence-friendly bike that is powerful enough to easily get up to speed for the exercises, and so agile that I felt at ease putting it through its paces. 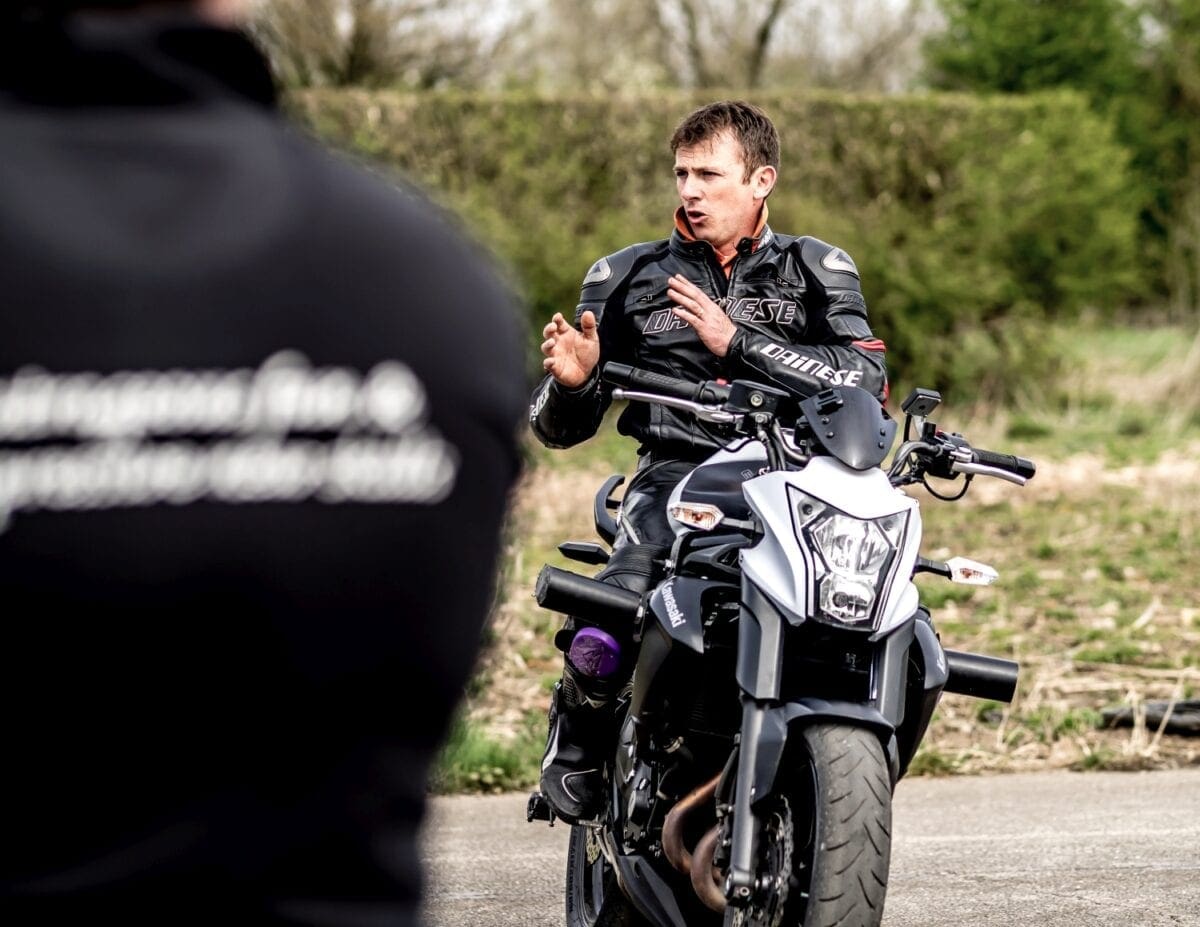 Just let the bike sort itself out

The first thing we learned on the course was that the bike is inherently stable (as long as it’s moving) and it’s the rider that usually upsets the balance. Tom gave us a quick talk about the gyroscopic forces that keep the bike travelling in a straight line if the controls are not interfered with by the rider. To demonstrate, he jumped on his bike and rode past us with no hands on the handlebars. The bike continued to travel straight on. The same happened even when he was standing on the footpegs, sitting on the pillion seat or even jumping up and down on the bike. It just kept going on in a straight line as long as he didn’t use the handlebars to try and force it in any direction.

Tom’s argument that bikes are inherently stable if they are moving started to look a lot more plausible now. But there’s still a big difference between seeing it and believing it. So, I had to try it for myself. At the risk of having to fetch some clean pants before lunch, I gradually built up the confidence to lift my hands off the bars at 30mph, then I stood up on the bike and finally even sat on the pillion seat while the bike was moving. And it worked: the bike kept the line with no drama! In fact, my bike seemed to be better at keeping a straight line without my input than at any point when I was ‘steering’ it. 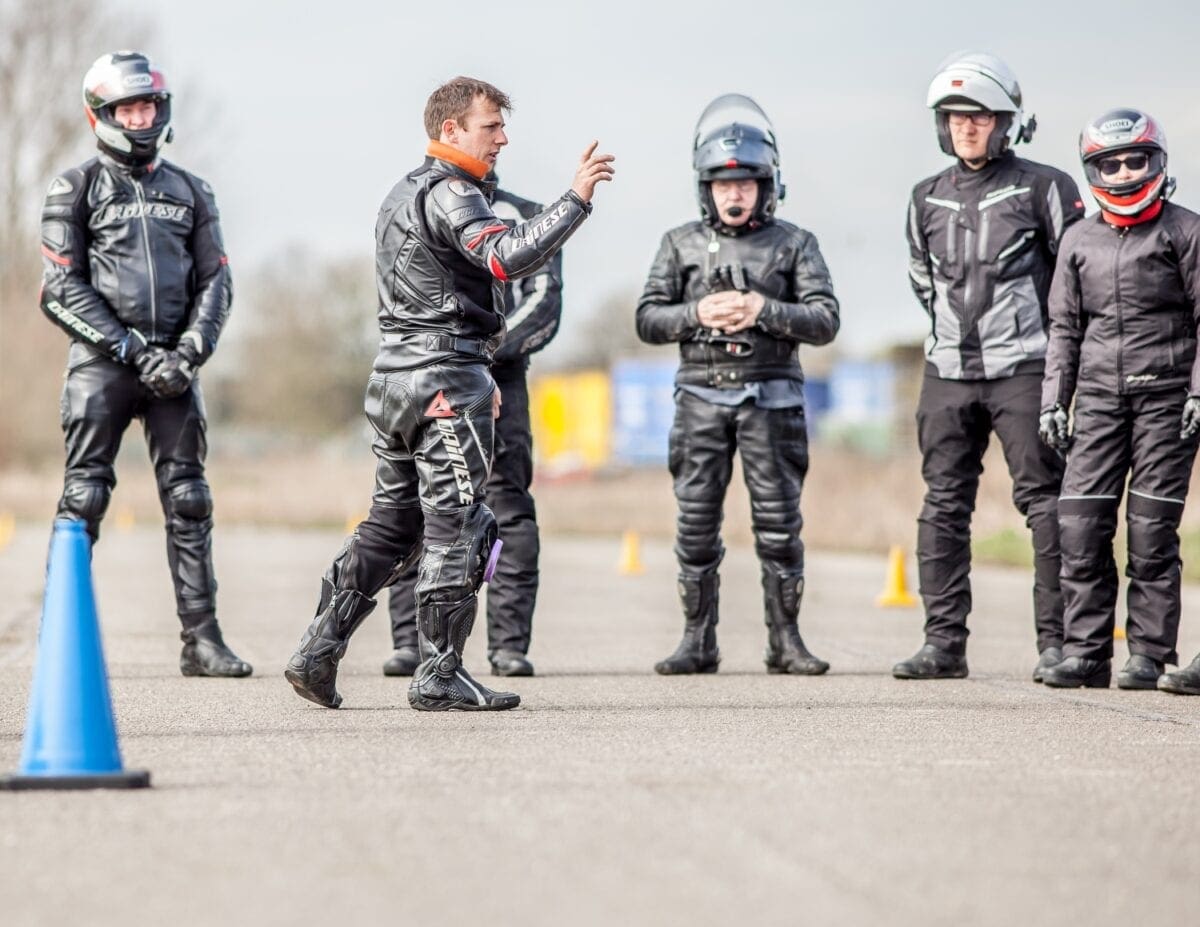 I was happy to find out that I hadn’t become completely redundant yet as the bike still needed steering input from me to turn left and right. Only not the way I had become used to steering it. I have a habit of holding tight to the bars in the hope that this keeps the bike steady, but the next exercise proved me wrong – again.

We were asked to take our hands off the bars at 30mph and then just gently push the bars with one finger either on the left or the right. And oh boy, what a difference that made. A light touch on the bars when I wasn’t holding onto them made the bike turn so quickly it startled me. And all the while the bike remained perfectly stable and composed under me. I had heard about counter steering before and even experimented with it, but it was only when my grip on the bars wasn’t interfering with the steering input that it all started to make sense. Why had nobody told me about this before? This was brilliant!

So, the myths about bikes being unstable, and heavy-handed steering being the answer to controlling them were very much busted. Physics, demonstrations, and now even personal experience, testified that grabbing the bars for dear life was not the way forward. 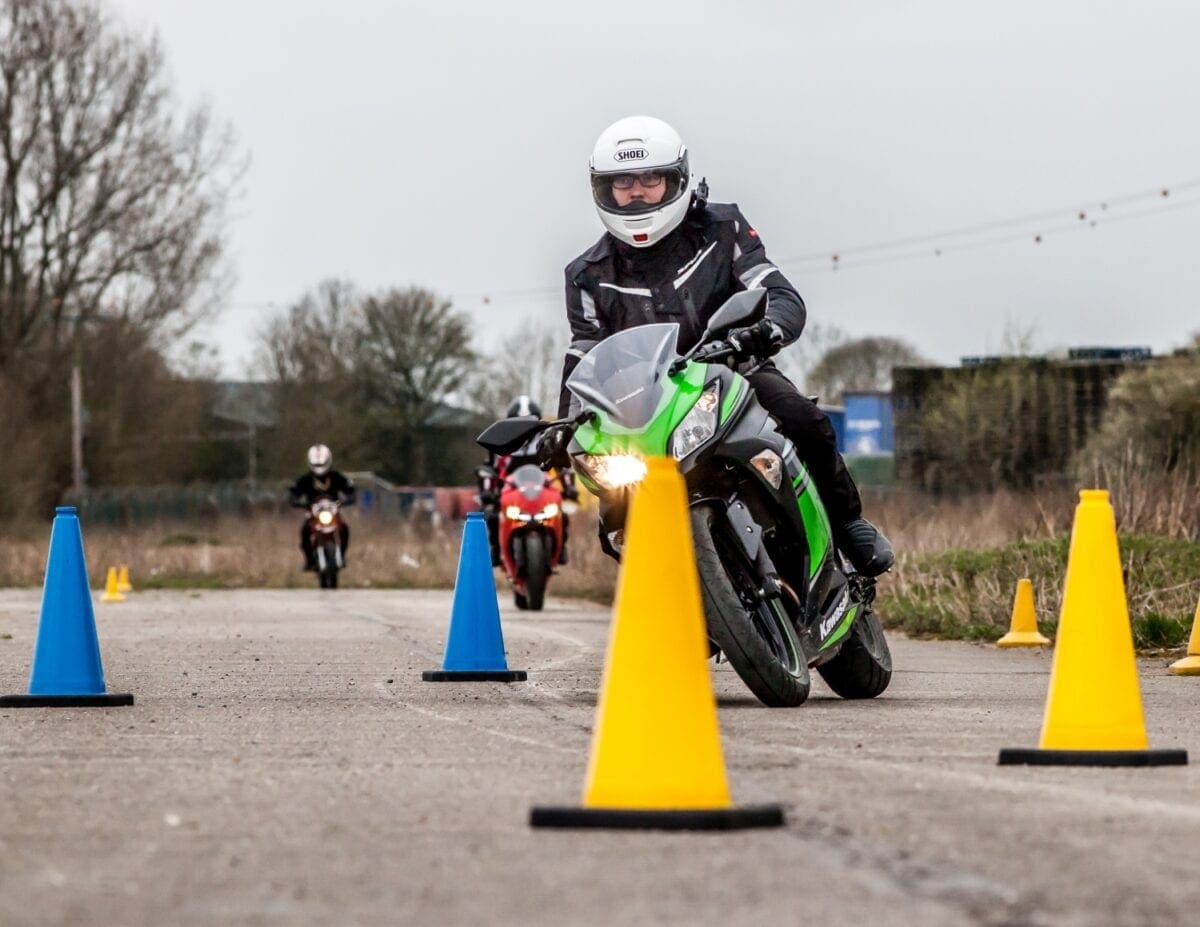 Avoiding or simply ploughing through hazards

Another eye-opener for me was how much space and time I could have to negotiate hazards if I applied the right combination of good observations, correct braking and counter steering. Over a few exercises we explored braking distances that our bikes were capable of, and how to deal with hazards once we had reduced our speed.

Tom’s method for effective braking was to only use the front brake. Again, this made perfect sense from the physics point of view: during braking, the weight of the bike is transferred to the front wheel of the bike, pushing the tyre to the ground and increasing the contact patch. Therefore, the best thing to do is to use only the front brake.

The next step was to add counter steering as a separate phase after braking to allow us to navigate a hazard safely. After the practice we had had earlier, this was all easily done.

What was more difficult to stomach was what Tom called the hazard non-avoidance practice: yep, basically riding over stuff. The idea was that sometimes it’s impossible to negotiate a hazard so it was good to know how to ride over it in the best possible way. As with many things on the day, it came as a bit of a surprise to me just how easy it was to run over a plank of wood without losing control of the bike. I managed it with my hands on and off the bars, throttle open and closed, and even while accelerating towards the hazard. 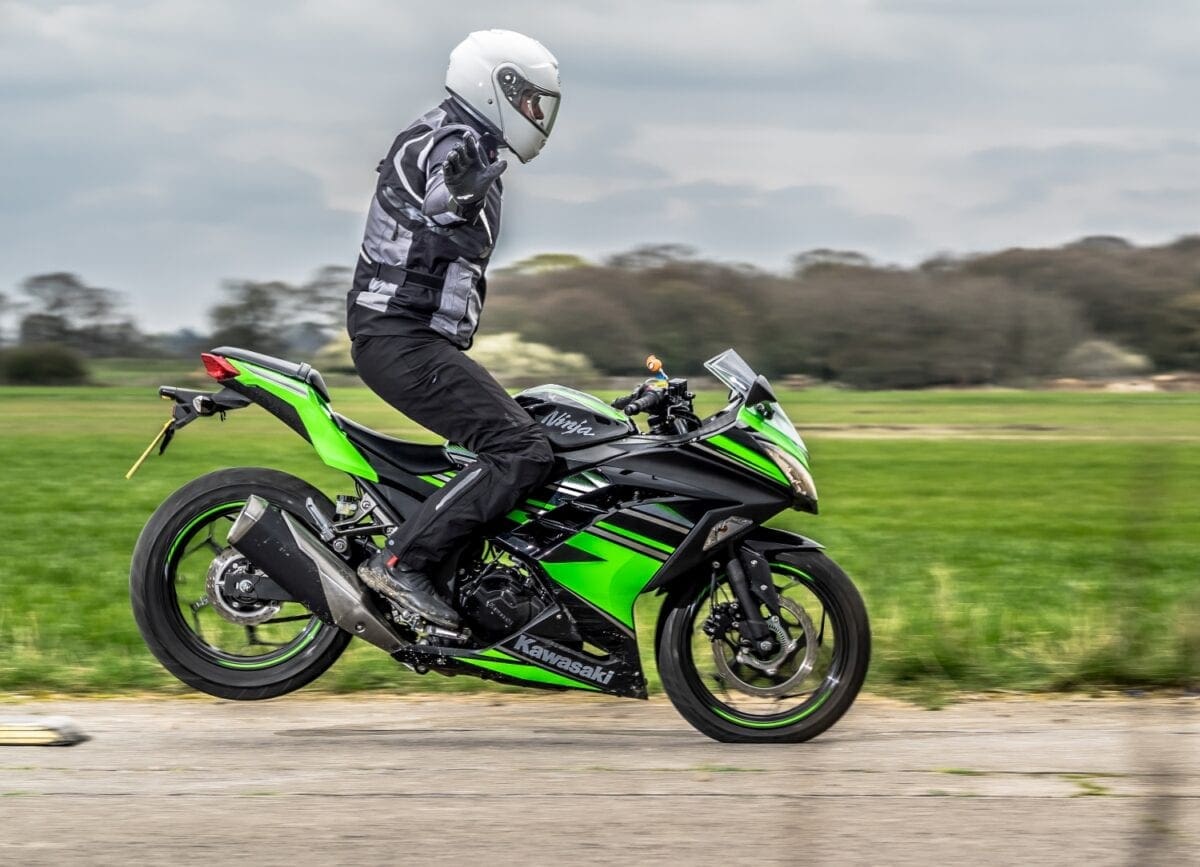 The final item on the agenda for the day was slow riding. Tom introduced two approaches to this. The first one was to simply not engage with any controls, in other words, leave the clutch, throttle and brakes alone and let the bike chug along on its own. This felt ok, but not particularly controlled. The bike moved slowly and steadily but there was no way to effectively change the speed without risking stalling or engaging the controls.

The second method of slow riding was to set the throttle and clutch at a constant position so that the bike was moving slowly, and then controlling the speed with the back brake. This way of slow riding added a lot more stability to the machine and made it possible to ride extremely slowly without losing control. Keeping the controls in the correct positions took a little getting used to but once you felt the right amount of bite it was easy to keep the back brake pedal as the only thing that was moving, while the clutch and the throttle remained in the same position all the time. 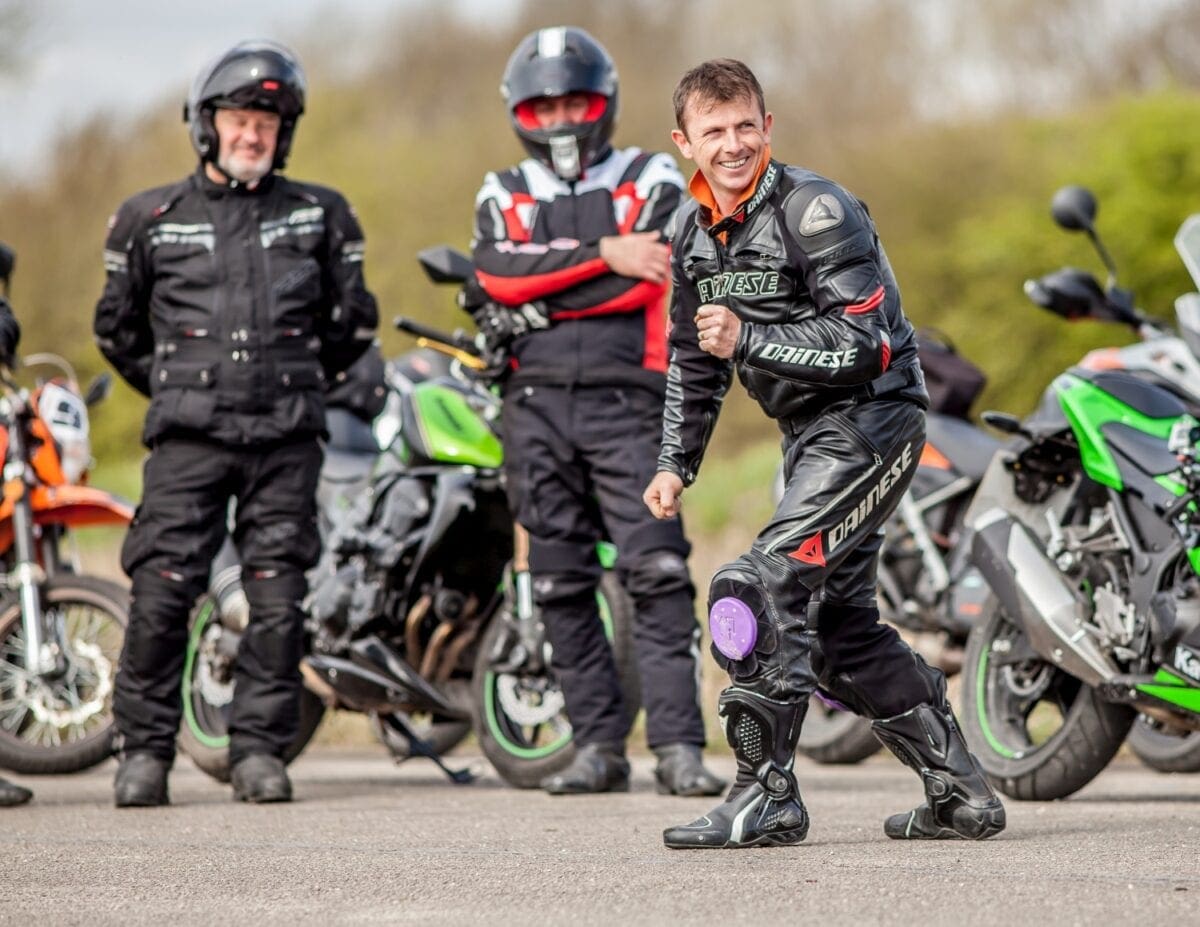 At the end of the day’s training I felt like my riding had improved leaps and bounds. Spending less time fighting the bike and instead just letting it do its thing, while applying gentle but firm inputs, seemed to make the whole process of riding a bike a lot more relaxed and enjoyable.

The courses start from £85 for a full day of engaging, fun and incredibly useful training. It’s a small price for skills that could one day save your life. None of the techniques are difficult to learn, but you need someone to explain the theory and then experiment with it yourself to really get it. It’s mind-blowing and it’s great fun. 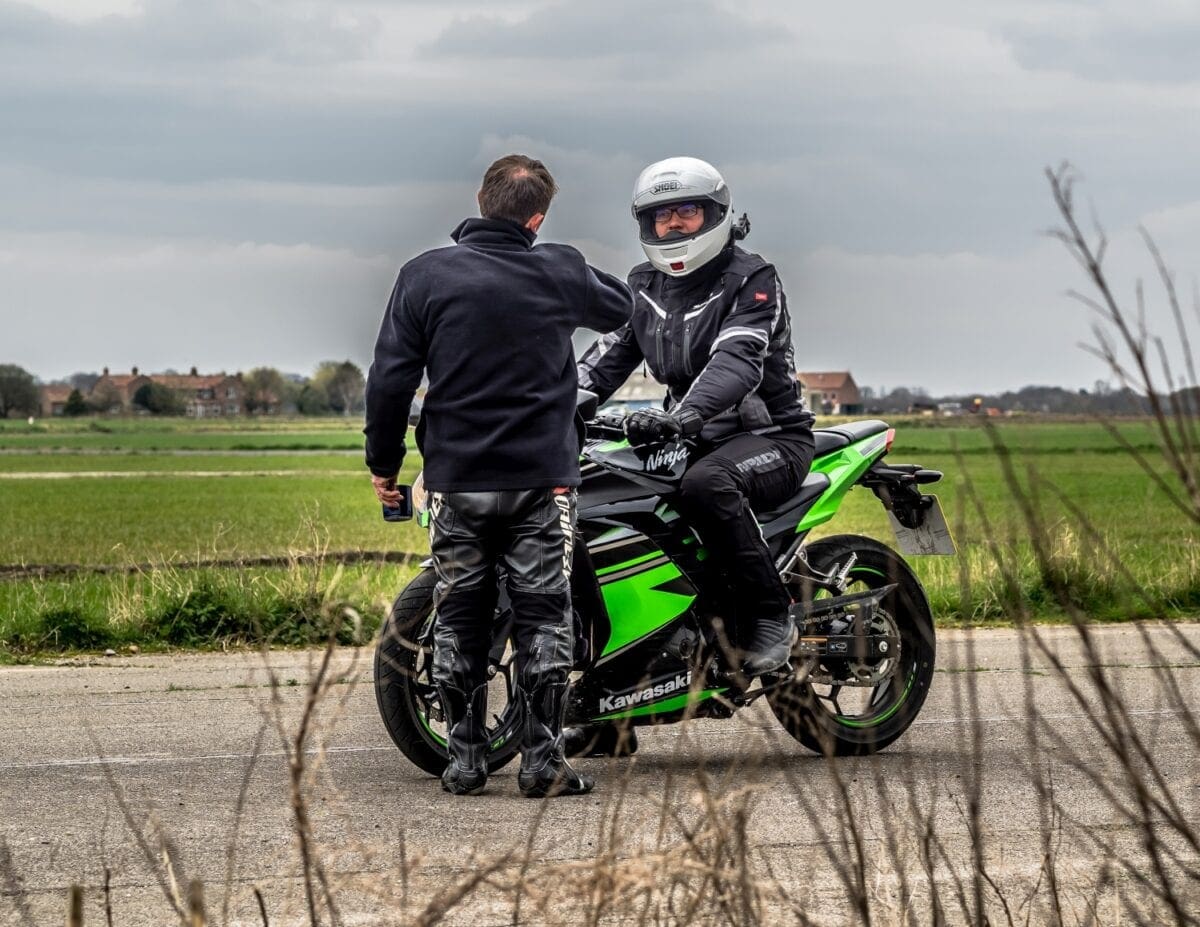