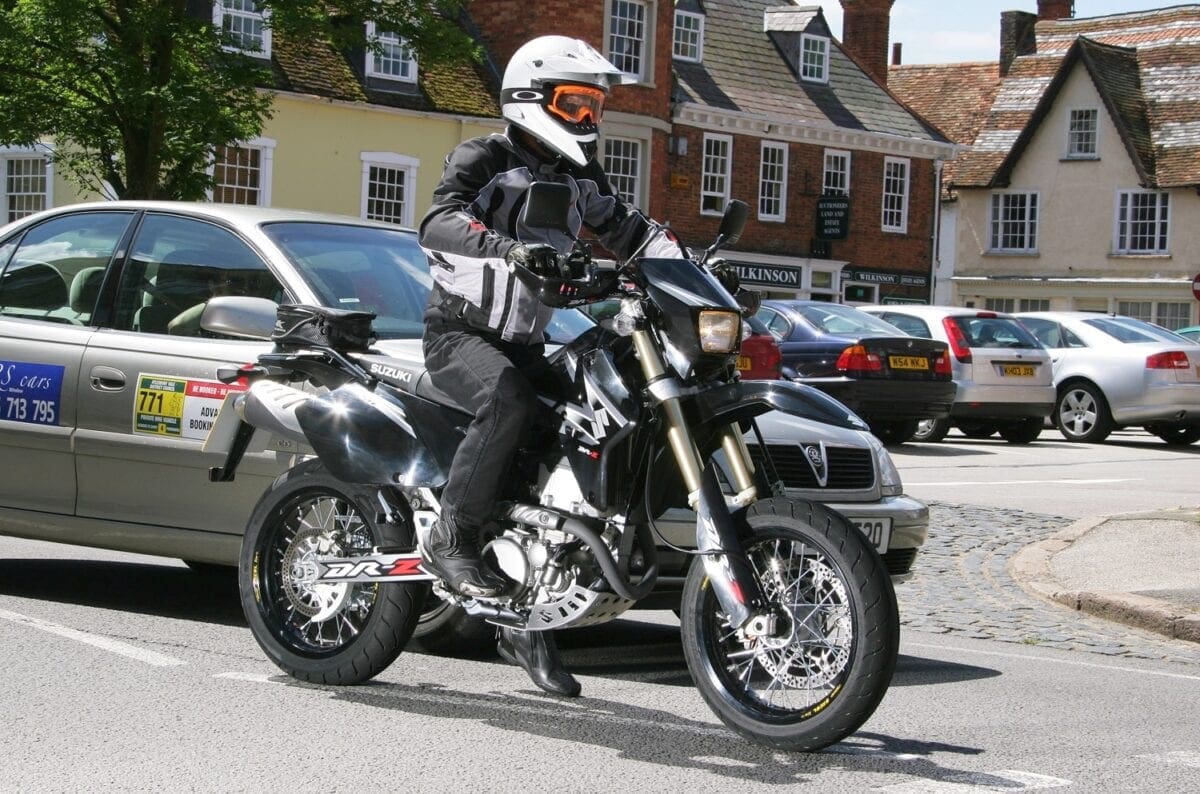 Ever thought about a trail bike as a scooter alternative for commuting? They have a case.

When did you last see a big four-wheel drive sitting in a traffic jam? If you live anywhere remotely urban in Britain, then the answer is probably yesterday, and you’ll see more tomorrow, and the day after. It’s become a truism that some folk love to buy large, expensive 4x4s for no better reason than they make them feel good, or safe, or arrogant or whatever – but the closest they’ll get to actually driving off-road is a manicured gravel car park.

Four wheel drives are not remotely practical in traffic, but I reckon that trail bikes (those other off-road/on-road dual-purpose machines) are, and might even have a case as traffic tools against the average scooter or naked roadster. The same applies to supermotos, which have the same basic advantages along with road tyres and, usually, better brakes. Of course, we’re not talking here about the giant adventure bikes, which can carry more stuff in their aluminium boxes than you’ll ever need for a commute. For me, their size and weight rules them out of city commuting, although I know some do use them. But a single-cylinder trailie or supermoto, up to 400/650cc could make a lot of sense.

What got me thinking about this was riding an SWM RS650, really a thinly disguised enduro with road-legal lights and indicators. Yes, it had a monstrously high seat, but it was also slim, light and I could see over the roof of the Fiesta in front. So should you consider one instead of buying a scooter or bog standard naked bike?

If you really want auto transmission, then trail bikes and supermotos are manual only, so that may rule them out altogether. And like any bike (as opposed to a scooter) space to put things is virtually nil, unless you can find a compatible topbox. Oh, and tyres. Despite rarely or never venturing off-road, most trail bikes are shod with dual-purpose tyres that aren’t as grippy as pure road rubber. The latest generation dual-use tyres are much improved though – tyre manufacturers having taken the realistic view that they’ll be used 95% on tarmac, and designed them to suit.

Built for off-road trail bikes have inches of ground clearance to prevent crunching frame and engine cases on hard and spiky rocks, or bogging down in mud. That necessarily means a high seat as well, which is fine if you’re six-footer with leg length to match, but not for the rest of us. Riding that SWM, with a seat top 900mm off the ground, I was looking for kerbs to park against, to be sure of a firm footing, and an unexpected camber could result in a nightmare of embarrassment and snapped levers. Of course, once underway and with both feet on the pegs, none of this matters, but it’s worth bearing in mind for traffic, where you can’t always choose where you stop with pinpoint accuracy.

However, there’s a real upside to a high seat and that’s the visibility. On any scooter or bike, we’re already sitting higher than the average car driver, which means you can see a lot more, especially what’s happening two or three cars ahead. Tall trailies take this, literally, to another level, because the higher you are, the more you can see and it’s surprising how much this can help in heavy traffic – you might see a way through that wouldn’t be obvious on a lower bike.

Long travel forks and rear shock are also part of the trail bike/supermoto make-up, originally to cope with off-road lumps and bumps, but they too have an urban dividend. On my road bike, I tend to steer around potholes, sunken manhole covers and speed humps, because we’re both happier that way. On the SWM, I revelled in being ride straight over whatever the road threw at us, and the long Marzocchi forks simply soaked it all up. So there’s another bonus.

Engine delivery is another one, though there are swings and roundabouts to the typical four-stroke single of a trailie or supermoto. The bad news is that they’re less flexible than a twin-cylinder motor or a four, especially the bigger singles, which can be a pain in slow moving traffic – a smooth twin might be happy down to 20mph in fourth, but a single will need another gear-change. On the other hand, when these singles can pull, the torque is pretty impressive and almost instantaneous, with less of a pronounced power band; all very nice for blatting through the traffic and taking advantage of gaps.

Finally, trail bikes are built slim, lightweight and with wide bars, all to make them more controllable off the tarmac. But all of these are benefits on road too. I need hardly tell you what a difference width makes to filtering or squeezing past the last few cars in the traffic light queue. The wide bars make the steering lighter and quicker, while light weight is always a bonus, wherever you’re riding. All of this makes trailies easy to balance at low speed, and trickle along, feet up, as slow as you like.

So there you go. Whether a trailie or Supermoto suits you and your typical journey depends on your leg length, need for luggage and attitude to gear changing. If you can cope with the downsides, there are plenty of advantages. And unlike a Range Rover, you won’t get stuck in traffic.

WHERE DID SUPERMOTOS COME FROM?

Supermotos have been around for years, but it seems to have been the French in the early 1980s who discovered that trail bikes made good traffic carvers, and could be made even better with smaller wheels, bigger brakes and sticky road tyres. The first home-brewed supermotos were so popular that the factories soon caught on; the rest is history.

No longer in production, but worth seeking out for its lower seat height

As much power as you really need, trail and supermoto versions