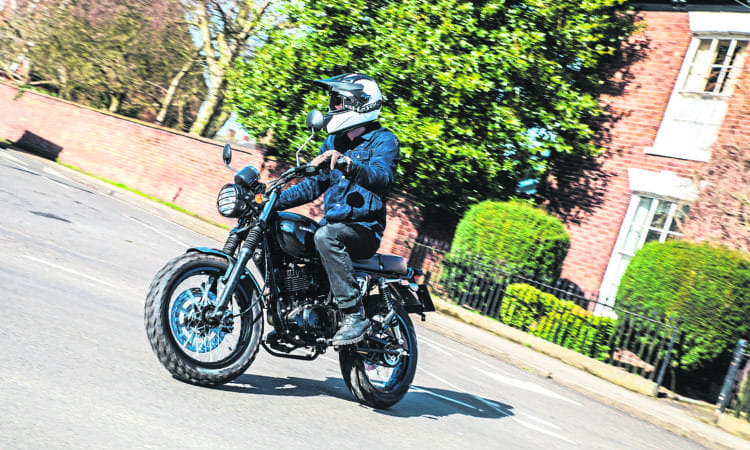 A fantastically cool bike with a 70s retro look but ultra-modern refinements.

Sinnis has brought this bike forward from an average-ish motorcycle to something quite special; the Sinnis Scrambler 125 is not only a great-looking bike, it’s mechanical and technical proof of just how far Chinese bikes have come over

Many people were stopping to have a look over the Scrambler whenever I parked-up, so it’s not just me that feels drawn to its charismatic looks. The side number panel adds to the retro look of the bike and hints at the competitive styling of this sporty little number – you really wouldn’t feel amiss on this bike on a cross-country rally.

It gives off an incredibly stylish and cool 70s retro look with a sit-up stance, tidy minimalistic frame and a high-rise pea-shooter exhaust. The 2018 model has been gifted with some cool improvements since the original bike came out in 2015; it now sports fuel injection, disc brakes on the rear, increased wheel size in black, booted with semi-knobbly tyres, a taller seat height and heat-shielding wrap on the titanium exhaust all adding to the look, handling and performance of the bike. This makes the Scrambler even better value for money and an even cooler contender in the 125cc retro competition.

My first experience of riding this bike was on a photoshoot for a different bike I was testing. During that shoot I swapped over to bring the Scrambler back to Mortons Towers and this was quite an enlightening experiment as the bike I had just tested was extremely similar in looks and ability to the Sinnis. I found immediately as I pulled away just how much more capable and responsive the Scrambler was in comparison to the bike I’d just swapped over from.

I don’t wish to do the bike I got off an injustice at all, but I do feel the need to express how different the two bikes were to ride, compared to how similar they were to look at!

The Scrambler’s impressive ground clearance, semi-knobbly tyres and steel mesh headlamp guard tempt the rider to go off-road – not something I tried on it as I already know that the Scrambler’s off-road capabilities far exceed my own.

It’s worth noting that the titanium high-rise exhaust, as cool as it looks, is certainly not cool to the touch, even with the cloth heat wrap on; it’s not a problem until you’re sat still at the lights in the sunshine (where was this exhaust during February’s frosts, when I needed warming up)?

This little bike has an admirable amount of ability for a 125 and never once did I feel uncomfortable with the riding position. The engine runs clean and sure and is easily capable of running around at 60mph without the need of re-energising the power by dropping down a gear.

The reliability holds true with the Suzuki-based motor and everything around it is covered by the two-year warranty and my time on the bike was consistently untroubled.

So, this is yet another Chinese bike to contradict the statements of those cynics among us.

This bike will hold its own despite the ever-increasing selection of retro-styled 125cc bikes on the market. Although the initial price of the bike has risen from its predecessor of the last two years, the bike is still very reasonably priced and the modifications on this long-awaited Euro 4 edition of the Scrambler are more than worth the extra few quid. And if the huge sales success of the 2016 model is any indication, then this is certainly a bike to be considering on a short list of desirables!

I’ve been fortunate to ride several of these Chinese bikes over the last couple of years and this is definitely one of the ones that stands out to me – maybe this bike is one of the reasons that Sinnis won the coveted Motorcycle Dealer of the Year Merit Award in 2017, at the British Dealer News Trade show (voted for by more than 1000 UK motorcycle dealers).

I shall fondly remember my time on the Sinnis Scrambler.