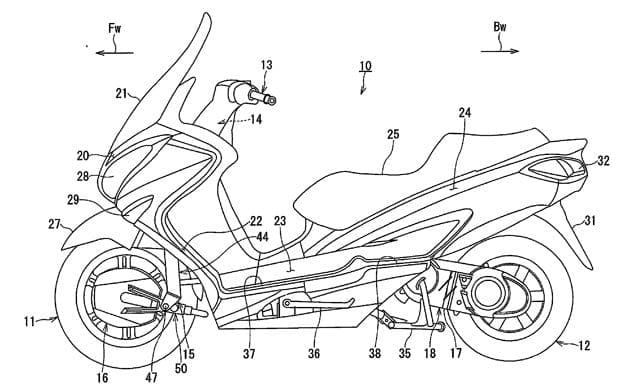 Suzuki has filed a patent application for a two-wheel drive scooter. It shows (what looks like) a Suzuki Burgman 200, with a hub-mounted electric motor in the front wheel that works to assist the engine-driven rear wheel. 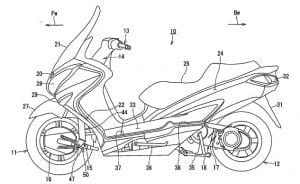 The main difference to a typical Burgman 200 is the front end. On the patent, the front wheel is mounted to a swingarm with a hub motor on the left side while a linked shock and brake are mounted on the right side. The motor powers the front wheel by driving a shaft connected to a planetary gear system.

From the diagrams we can tell that the swingarm is mounted to a stiff fork at a pivot point, and that the shock absorber is connected to the top of the right fork leg, and the swingarm at a point just above the wheel axle. We can also see that the brake disc and caliper are on the right side, presumably helping to provide better weight distribution (while offering easy access to the brake and shock as well as the left-side mounted motor). 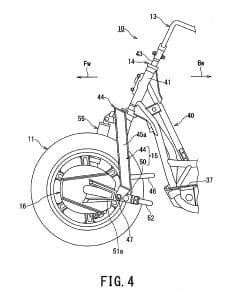 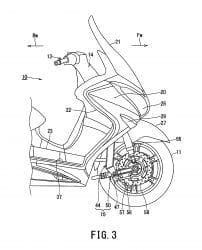 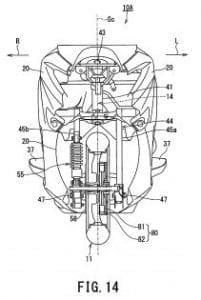 Sadly the patent offers no specific information about the motor’s performance, and also offers few details about the engine powering the rear wheel, except that it is likely to be mounted within the bodywork or integrated with the rear swingarm.

It remains to be seen whether Suzuki will be taking the technology to market – but it is quite common for Suzuki to use the Burgman as a testing ground for new technologies, so we’d bet on it appearing eventually.

The Japanese factory is also currently hard at work on a hydrogen-powered fuel cell Burgman, which is currently at the testing stage – so this patent is surely an indication from the Japanese factory that they’re putting some serious thought into two-wheel drive technology.

As a little aside, our sources in Japan have also told us that Suzuki are planning to run public trials for the hydrogen fuel cell Burgman, with the view of running a ‘Boris Bikes’ style scheme and renting them out in cities.