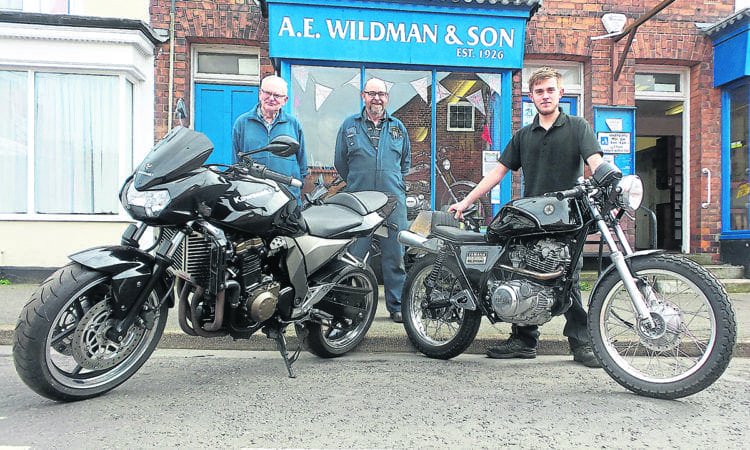 One of the oldest established motorcycle businesses in the UK, still using its original premises, is now under new ownership.

Established in 1926, Wildmans Motorcycles in Spilsby, Lincolnshire, now has a new owner – 18-year-old Chris Lake, who is just finishing his motorcycle apprenticeship with the firm.

Chris took over the business on May 1 from former owner Peter McDowell, who has owned Wildmans since 2005. Under Chris’ ownership, the business will reach its 100th anniversary in seven years’ time.

There aren’t that many motorcycle businesses that can boast that sort of history, or that are even still trading from the same location where they started, namely at the site of the local blacksmith’s forge.

Next to this building was the blacksmith’s house, which was later purchased and converted into a motorcycle showroom, and is still used as such to this day.

In 2011, the premises was expanded across the alleyway to where the current mechanics’ workshop, counter sales and parts office now stand. The original blacksmiths forge is still used, but serves as a long-term bike storage facility or for machines awaiting attention in the workshop.

Although now under new ownership, the business will continue to run much as it did previously with Chris and main mechanic, Alan Fixter, carrying out normal servicing and repair work (Alan has over 35 years’ experience of working with Honda and Suzuki machines). Peter, although officially retiring, will remain on standby to help during busy periods, should help be needed. One change that Chris does want to make fairly quickly is to introduce a 24-hour breakdown service.

Although originally started by Wildmans, the well-known annual Spilsby Bike Night, which attracts hundreds of bike riders from all over the county (and even beyond), has not transferred with the business and is now run by the local rotary club (this year’s event took place on May 21).

They are open from 9am to 5pm, five days a weeks (closed on Tuesdays and Sundays).