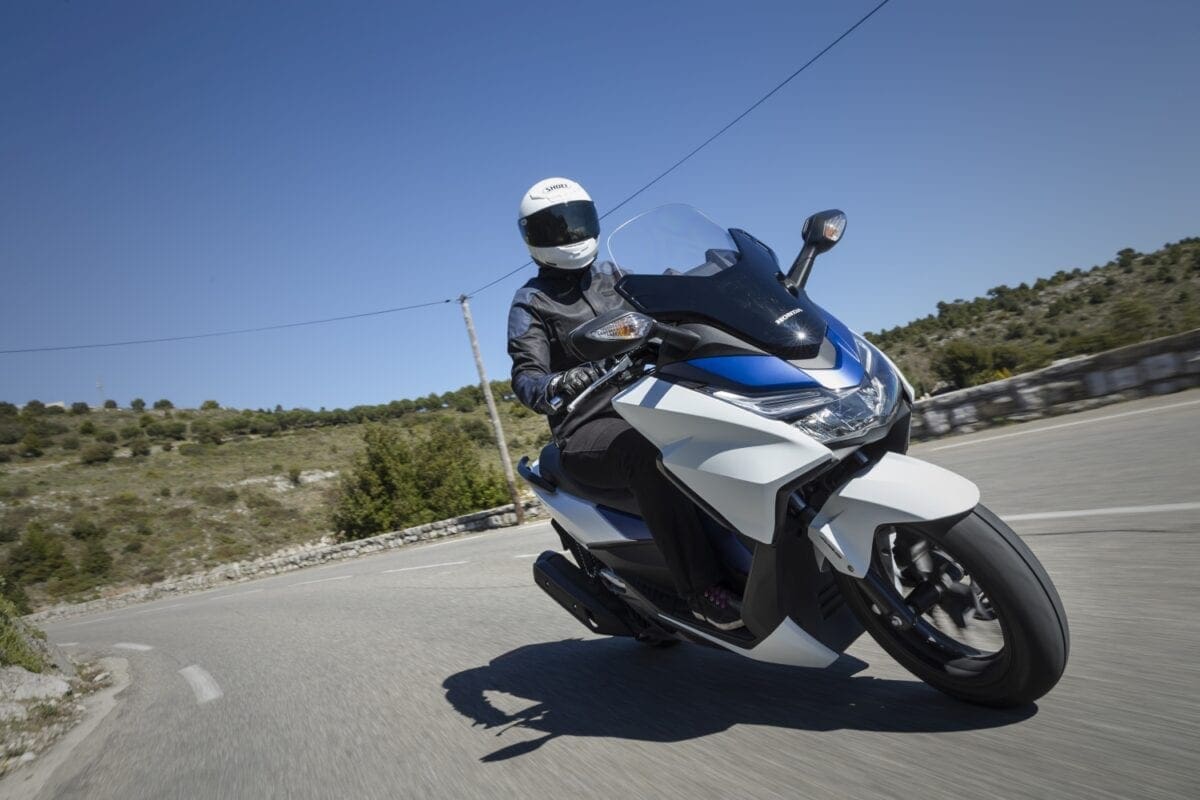 In the development of their new machine, Honda’s aim was to blend the luxury and space of a Grand Touring (GT) scooter, with the agility and sportiness of smaller and lighter machines – no mean feat, but they’ve nailed with the new Forza 125.

Powering the outfit is a liquid-cooled, four-stroke, four-valve, SOHC single cylinder – one that Honda fans may recognise from the PCX and SH models, however, over 60% of the parts are different. It produces 14bhp @ 8750rpm – which makes it A1 licence compliant – and 8.9lb-ft of torque @ 8250rpm.

It features Enhanced Smart Power (ESP) low friction technologies to boost the economy of the machine – including idling mode – known to some as ‘start, stop’ technology. A switch on the right handlebar allows you to turn it from ‘idling’ or ‘idling stop’, having it on the latter option means that the engine stops automatically after three seconds at idle when the scooter has stopped and the brakes are applied – it starts up instantly once the throttle grip is twisted. It can take some getting used to and can feel strange at first, but once you get used to it happening then it just becomes normal.

The focus on fuel efficiency has worked. Honda quote 123mpg, I got 113mpg but certainly wasn’t riding with economy in mind. On this basis, the 11.5 litre fuel tank will give a range of around 300 miles – your local petrol station will start to miss you…

It’s been treated to an all-new steel frame and Honda has done lots of wind tunnel development to manage the way the air travels into and around the scooter. This emphasis on highway stability and protecting the rider from the elements, lead to the inclusion of a six-way adjustable windscreen, which importantly can be done on the move – with gloves on – and covers a range of 120mm so different rider heights are catered for.

Suspension is provided by 33mm front forks and five-stage pre-load adjustable twin rear shocks. It’s an agile machine, helped by the 15” wheel on the front and 14” on the rear. ABS comes as standard – as you’d expect from Honda – and is ready to work with the 256mm front disc and 240mm disc on the rear should you need it. For new riders, this is a great addition and means that there is added peace of mind. 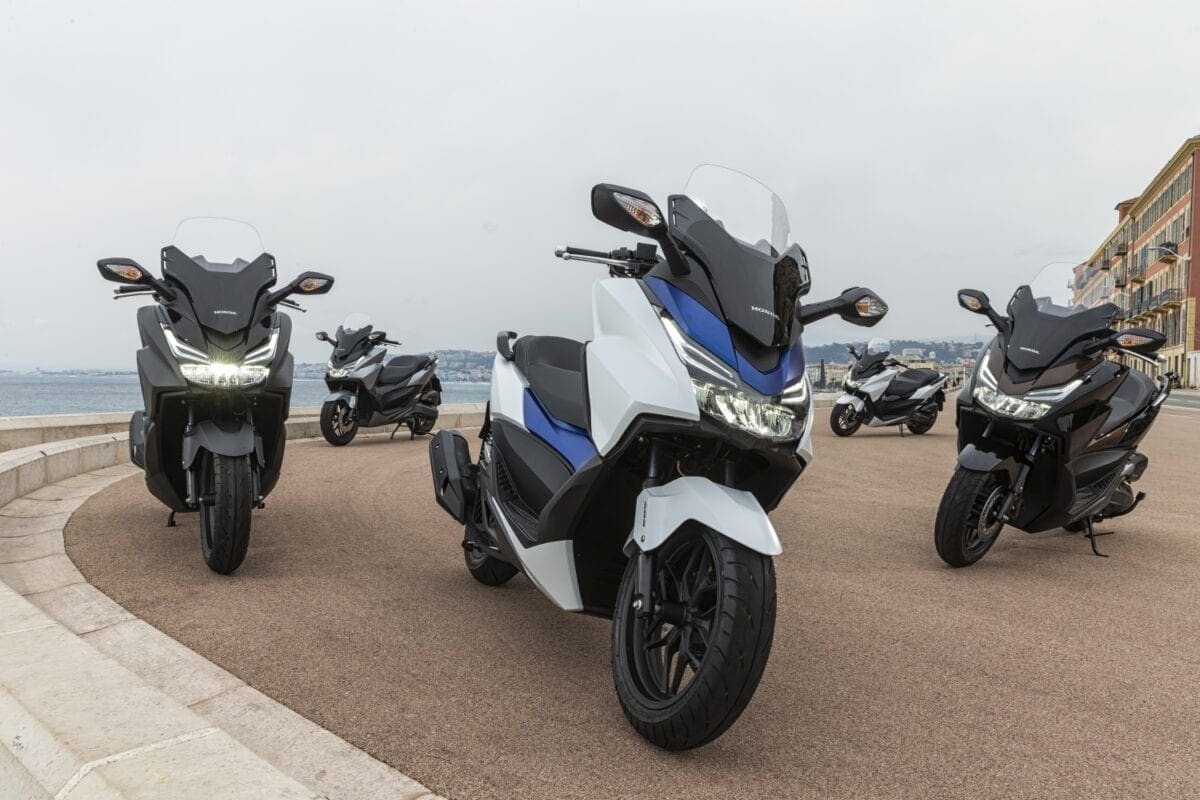 For its size and presence on the road, it’s a lightweight, with a kerb weight of 159kg. The overall dimensions make it a breeze for darting in between traffic – judge your gap by the width of the mirrors and you know you can get the 750mm wide machine through.

There’s plenty of space for a pillion with grab rails and foldaway pillion footpegs.

There are LED lights throughout – tail-lights, dual-headlight and indicators. The indicators aren’t plonked on the main body, but are instead integrated onto the mirrors to further emphasise the smooth sleek lines that so much effort has been put into.

Pop the seat using a button at the side of the ignition and you’ll see the whopping 48-litres of storage hidden under the seat, big enough to swallow up two-full face helmets. There’s a plastic divider too so that you can pick and choose how you’d like to organise your belongings – clever. There’s an additional glovebox too which is home for smaller items such as a bottle of water or your phone.

There’s a comprehensive ‘cock-pit’ style instrument panel, which is packed with information but organised so it’s easy to see at a glance. It includes: a clock, fuel gauge, coolant temperature gauge, oil change indicator, odometer, Trip A and B and fuel consumption – both average and current. Simply switch between them using two small buttons underneath. 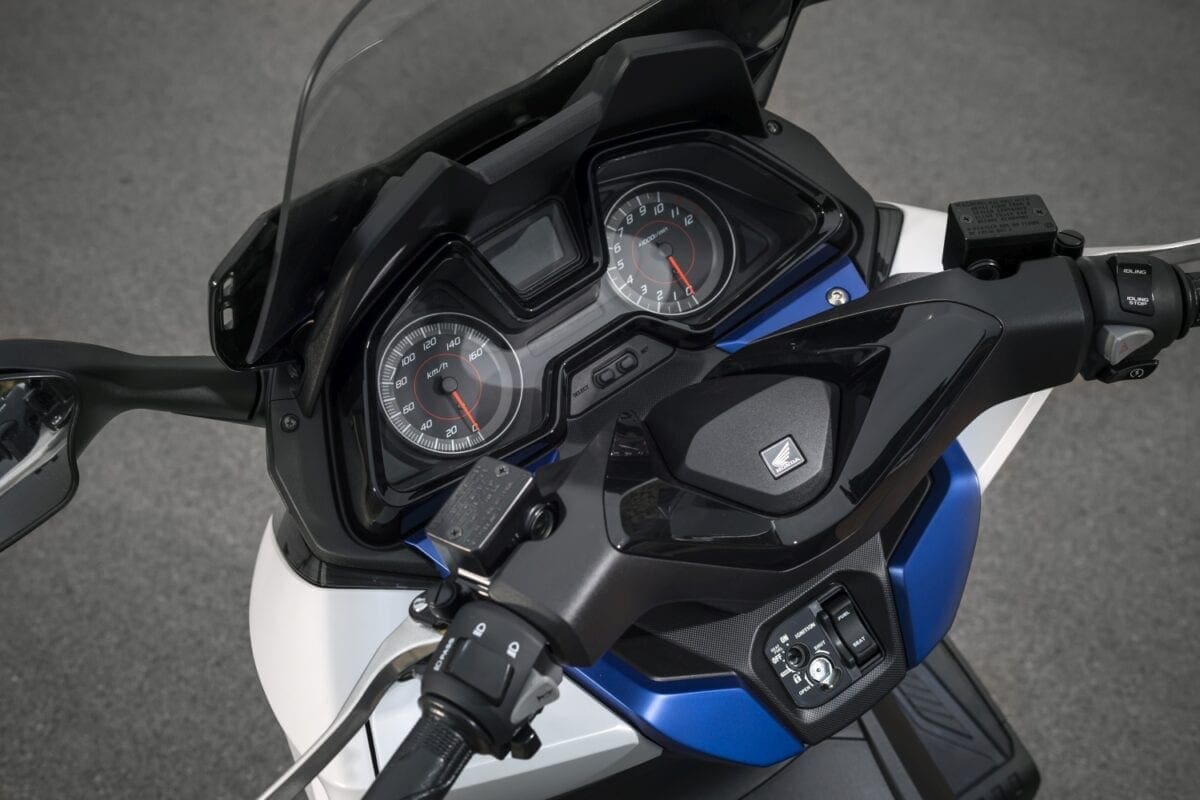 It’s hard not to look at the Forza and expect the performance of a larger capacity machine – after all, it’s striking looks and GT style presence gave me high expectations. I asked the Large Project Leader, Tomokatsu Suda, if they were planning on developing a larger capacity one – having ridden it, I don’t think they necessarily need it.

Acceleration is strong throughout the range, even at high speeds, it kept on pulling. Our route through Nice and Monaco allowed us to try out the Forza on mountainous roads, with sharp hairpin bends and climbing inclines and also motorways to test out that top speed. Nothing was too much for the Forza, it chomped up the motorway miles at 70mph with ease and I wasn’t battered around thanks to the windscreen. Up the picturesque mountain roads of Monaco, rolling back the throttle, there was always drive there to ‘hussle’ you round the bends.

It’s the attention to detail of the design which really stands out for me, the underseat storage is a big winner – I know of some maxi-scooters with less storage space. It’s not just under the seat which is roomy, the riding position is comfortable and there’s the option to put your legs out straight like on larger scooters. The 780mm seat height makes it easy to put your feet down but to be honest, that will be rare because of the balance at slower speeds and it picks straight back up when you pull back the throttle, as a result slow riding is easy.

Honda’s aim was to make a scooter with a GT spec but maintain the sport ability of a 125, they can pat themselves on the back – they’ve done it and still manage to maintain a cool looking machine. 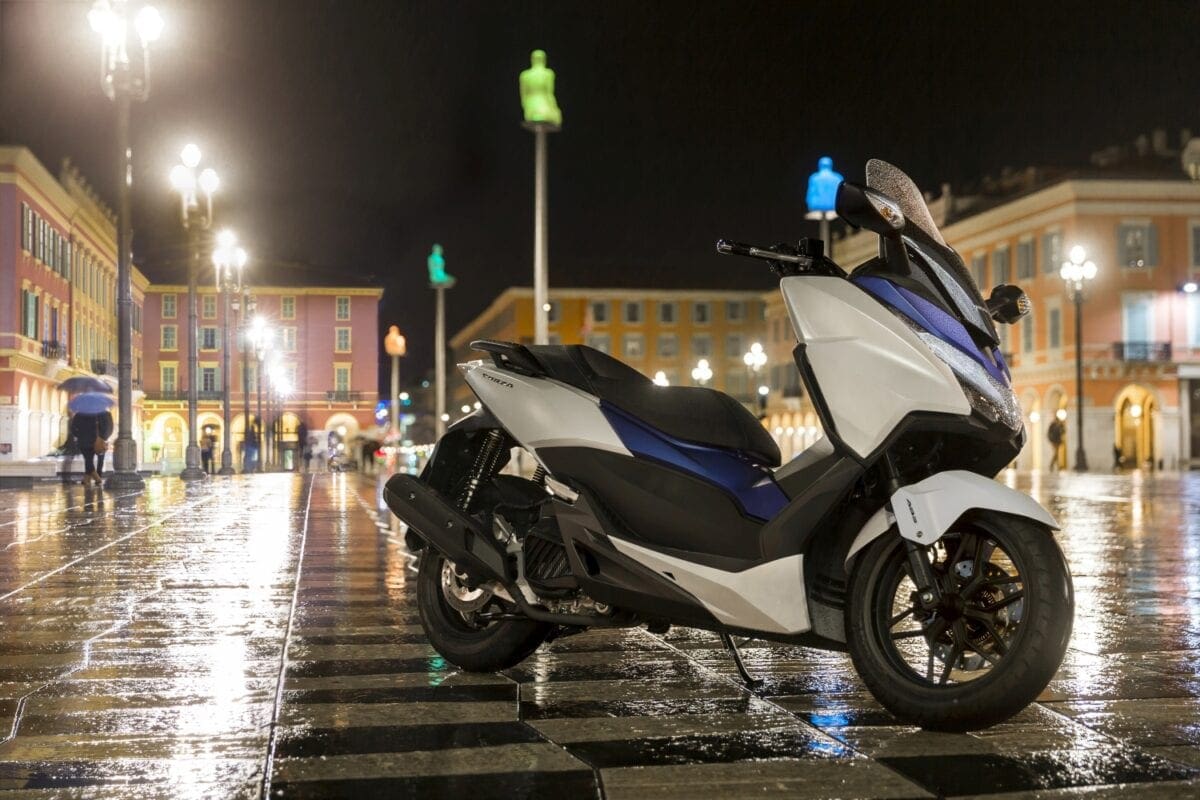 Whether it’s your first foray onto two-wheels or you’re a seasoned commuter, the Forza 125 is worth taking a look at.

The slow speed agility and the high speed stability make it a great riding companion – not to mention the bags of underseat storage and weather protection from that lovely adjustable windscreen. Often when manufacturers make ‘commuters’, they assume that everyone lives in the city and don’t often account for the motorway section before the jam-packed streets – Honda has.

It had the stylist as the Vultus – angular lines, a ‘mass-forward’ look reminiscent of that Integra, aggressive front headlines and a high level of finish mean that the Forza makes a real statement.

There will be three colour options in the UK – blue and white, white, brown and two-tone grey. While the price hasn’t officially been confirmed yet and is still ‘TBC’, we believe it is expected to be around £4000. It will be available from May onwards. 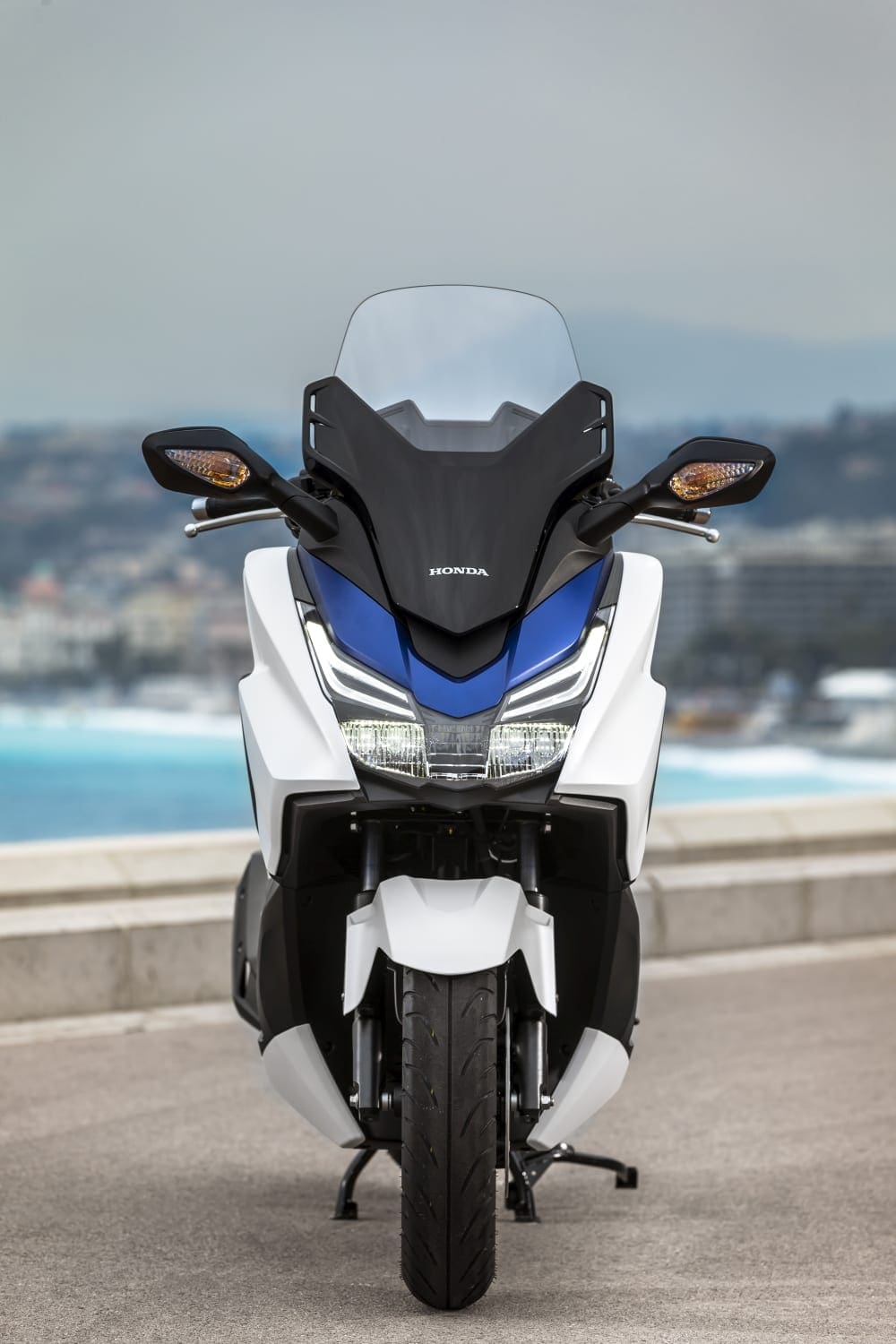 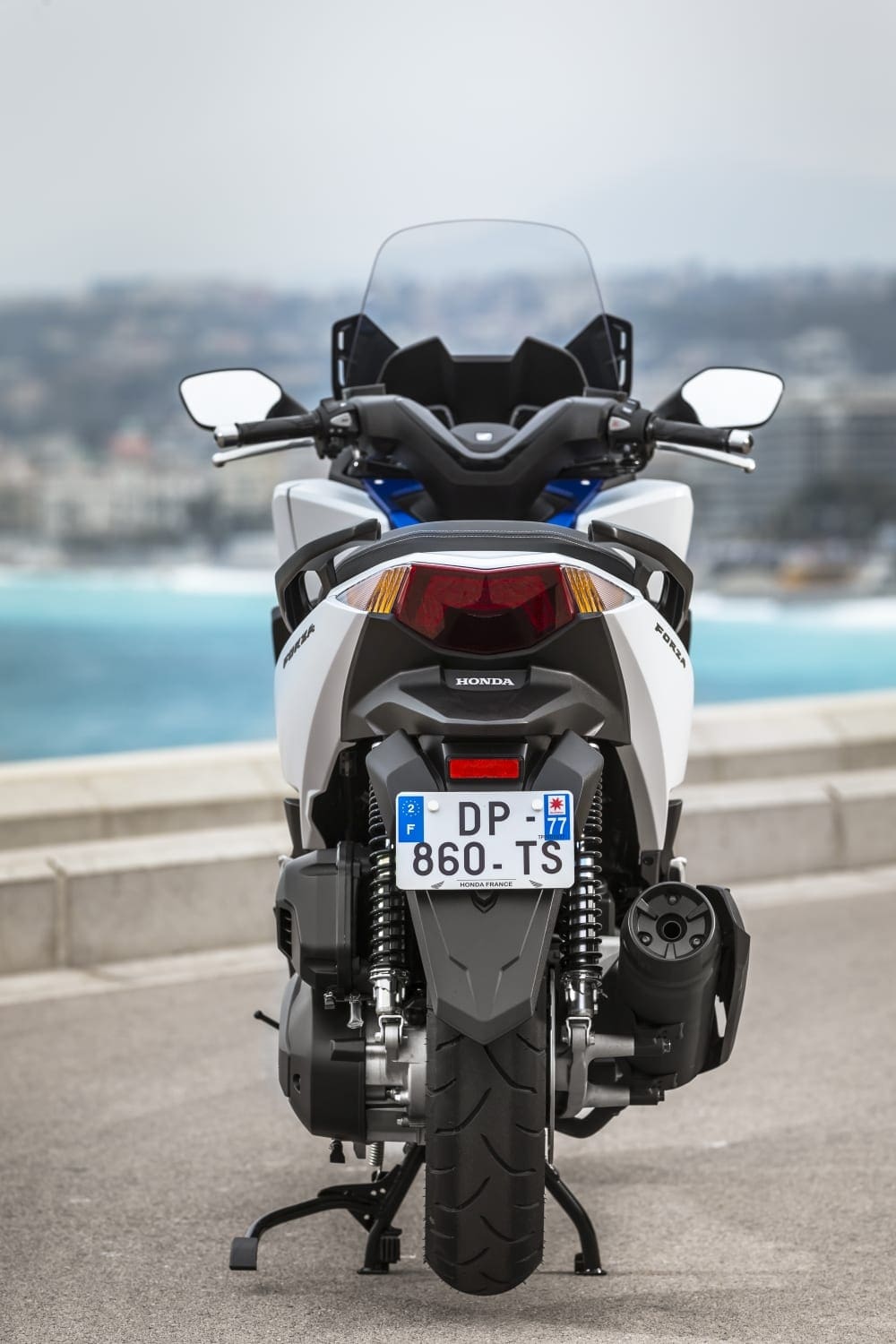