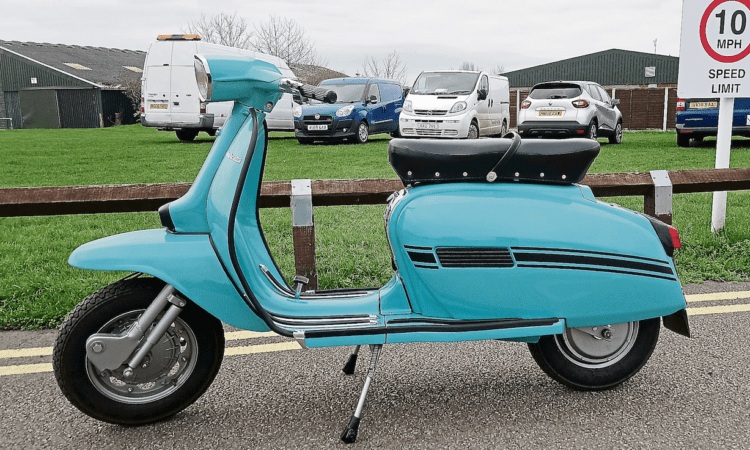 Anyone who attended the Carole Nash Winter Classic at Newark couldn’t help but see the amount of interest that was being shown in an electric Lambretta GP scooter, which was being showcased by Restrospective Scooters owner, Niall McCart.

Once word got round that you could have a go, folk lined up to ask questions, watch the machine in action, or to have a go themselves. I must admit that I was suitably impressed – not only by its handling, but also by the speed of the scooter, writes Pete Davies.

The GP belongs to Niall’s mechanic, Dave, and up to the show it housed its Innocenti-built engine. However, Niall had other ideas and a swing-arm was sorted along with a tray (capable of holding three batteries), wiring loom and even a fake engine casing.

I must admit that when I saw the scooter I did wonder if it was just a standard machine? How wrong could I have been!

Niall opened the toolbox door to reveal the battery connections. Flipping off a side panel revealed the hub motor at the rear, with the fake engine casing, which, if you just walked past, looked like the Innocenti item, save for the fact that there was no kick-start.

The batteries (all three of them) were sat side by side on a purpose-built tray, in the space once occupied by a conventional petrol tank.

Given that this electric scooter is intended to do city work, I must say that the lack of sound was my only criticism. It does seem surreal to watch a scooter zipping round with absolutely no sound whatsoever. Crazy!

Grab yourself a copy of the May issue of O2W, and you can read more of Pete’s review!