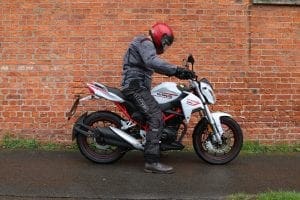 Small engine commuter bike – that’s what stuck in my mind when I was told that the Sinnis RSX 125 EFI was my next test bike. How wrong I was… it’s so much more than that.

The model that arrived in the Morton’s stable was the pearl white and red and I was pleasantly surprised at the styling. From the lattice frame in red to the front side panels with built in led strip lights (I’ll come on to these later) and the rear wheel floating hugger, the attention to detail on this machine for the money was above my initial expectations. Without sounding like I’m being bias, the Sinnis has the edge on some of the more mainstream brands at the moment. The acid test will be how it cope’s on the road test.

With a seat height of 780mm and a dry weight of 140kg, this is a bike that isn’t intimidating in any way. Neither is it so light and small that you feel like a character from Toy Town, waiting for Noddy and big ears to arrive (whoops, kind of showing my age a bit there). Once on board the seat cossets you and places you in a comfortable, upright riding position. I’d like to say almost motocross in your body geometry. Its electric start was brisk and the initial engine tone was not the overly loud raspy unpleasant, almost forced shout of some of the cheaper Chinese imports. To be honest I was not expecting to be as impressed but I was. The 125cc engine produces 11bhp and delivers this in a very smooth and in a predictable way. Vibration that on 125’s at high rev can really be uncomfortable was not evident at all. This is exactly what you want, from a commuter bike such as this. It’s not going to win any races but that is not at all what it’s been designed for. Arriving at you place of work without vibration white finger and a numb bum is always a good start to the day.

Step back from most pacific rim or Chinese imported bikes and many of them look better than the sum of the parts that have been used to create them. Take a few steps forward and you are met with the realization that you are looking at a styling exercise that has been poorly executed. The Sinnis RSX 125 EFI is not one of these in any way. It’s been constructed with longevity in mind, a commuter that they are obviously expecting to be around for more than just a couple of years. From the trellis frame, (just a tad of the Italian Ducati Monster in there) to the paint finish and plastics. The bike not only looks good but has not been thrown together in a rush either, no unwanted rattles, no loose fitting or tacky add ons that just detract from the purpose of this bike.
One area of this type of machine that on other brands can let them down has been the gearbox’s. The RSX is one that bucks this trend. I still class myself as a novice in this world of testing but what the RSX has is a akin to something considerably more expensive. Not ones have I hit a fault neutral, not even in my haste to exit a junction have I ended up in the actual neutral (done this a couple of times and its rather embarrassing when in a group crossing a busy junction). Its precise, smooth and vibration free.

The Sinnis RSX 125 complies to the new stringent Euro 4 emissions regulations but doesn’t compromise because of it. Its suspension though on the budget end of the scale is not so soft as to make the bike dive or wallow and is not so hard it makes your teeth rattle. More than able to cope with the everyday demands you’ll be putting this bike through. The brakes are 290mm front and 230mm rear linked hydraulics. This set up makes sure that the RSX can stop as well as it looks. The pure digital display is simple and uncomplicated but boasts a feature that on a bike of this price you just don’t see, a USB connection. Not only do Sinnis intend you to get to your destination in comfort but you can also have a fully charged phone. Tyres are front 110/70/17 and rear 130/70/17 that after scrubbing in (a term I use in a subdued way, as on a small capacity bike you are rarely going to be getting close to knee down territory) gave a positive level of grip. The lights on the RSX are the one thing that I have to give Sinnis a huge pat on the back for. They are by far the best I have seen on a bike of this type and really do give you fantastic night time visibility. That for a UK commuter machine is critical at this time of year. There’s no point looking all stylish if you can’t see a bloody thing when you are on dip beam, and I have to say that there are quite a few low priced imports that really don’t inspire any confidence in none city night time riding. You also get the added bonus of what I would describe as running lights. These are strips if LED’s mounted in the front leading edge of the side panels, not intended to increase your (the riders) night time visibility, they giving a stylish look and make you more visible to other road users. Brilliant job Sinnis.

This should be me rambling on about where I have been and how I feel, but you really don’t need to hear any of that. Yes I have done a good few hundred miles on the RSX and not once have I looked at is and thought I think I might take the car today. Let’s just get down to wether as a tester I’d be upset to know that this was now my everyday ride. No I wouldn’t. Its not a sporty spirited white knuckle high reving bike. It’s a seriously well-crafted and constructed alternative to the main stream big names. You’d better watch out Mr Kwak and Mrs Suzi, this little upstart from Brighton based Sinnis is coming and its ruddy good value for money.