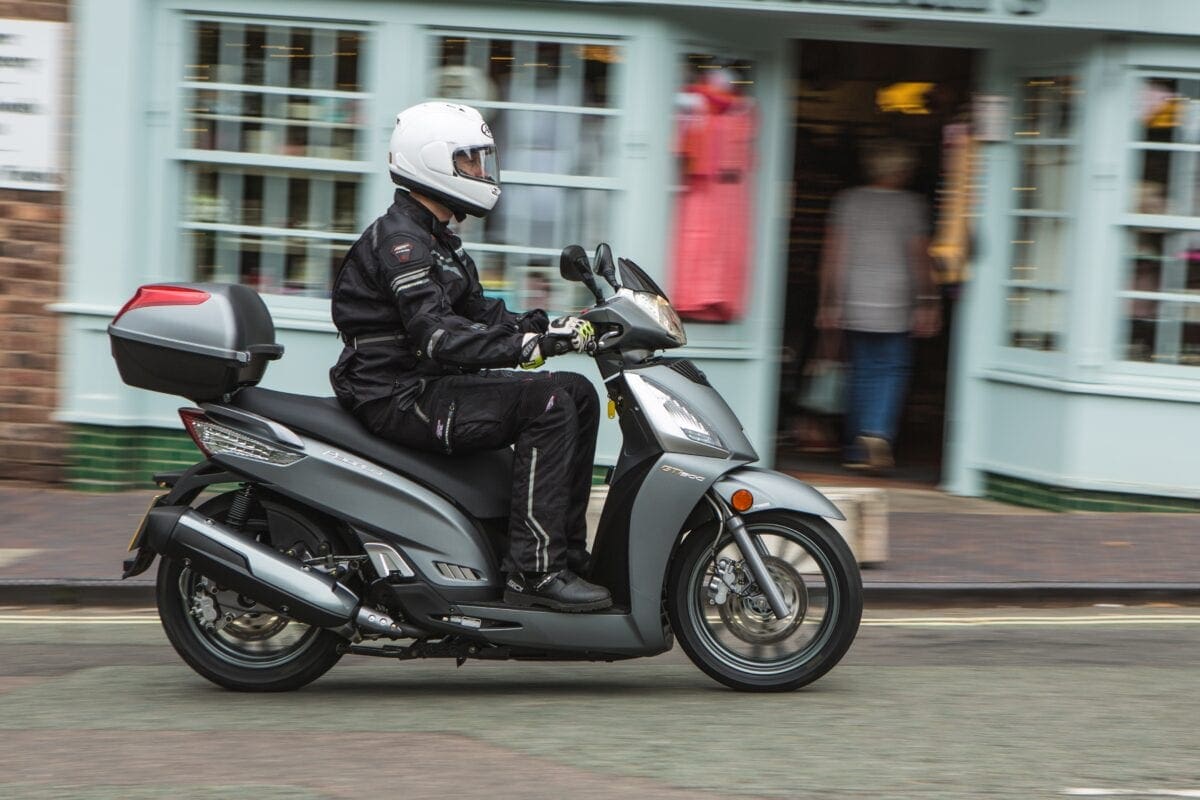 I have always been a bit mystified by 300cc bikes and scooters. They seem to inhabit the no-man’s land between A1 and A2 licence categories. Too much power for the former and well short of the maximum allowed for the latter. But the test ride on the KYMCO People GT 300i ABS (let’s just call it ‘the People’ for short) opened my eyes to how much fun these mid-range scooters can be in towns and cities.

The People is built with pragmatism as the guiding principle, and the design is simple and understated. The indicators have been sunk into the body to create nice clean lines, the small screen adds to the city looks, and the colour-matched top box comes as standard equipment. And those 16in wheels make it look stable and capable.

With a nice big space between the front panel and the seat, this machine is about as easy as it can be to just jump on and ride – just what you want from a city run-around. It might not be ground-breaking in terms of design, but it makes perfect sense in the city.

The dash is as simple as the rest of the design, and it too works. There’s a big analogue speedo in the middle and a digital display for fuel, odometer time and engine temperature.

There’s a pleasant sense of urgency in the 299cc, single-cylinder, four-valve, four-stroke, liquid-cooled, OHC engine. The maximum power output is 28.4bhp, which combined with decent acceleration, is plenty in urban riding. The speed builds up effortlessly, compared to many smaller scooters.

I must admit that I have developed a bit of a penchant for KYMCO transmission systems over the last year or so. They seem to be amongst the smoothest and most accurate around. No wonder that the likes of BMW are also relying on KYMCO for transmission for their scooters. On this particular scooter the automatic CVT kept the gear ratios and the revs in the optimum range all the times. I don’t know how they do it, but it works like magic.

This is a EURO 4-compliant scooter, which means that in addition to complying with the strict emissions regulations, it also features ABS brakes, an automatic headlights-on system, and on-board diagnostics. For the rider it’s mainly the ABS that makes a difference (unless you’re obsessed with switching your headlights on and off yourself). The People is equipped with a Bosch ABS system that works very well: I didn’t manage to either lock the brakes or crash while trying.

This is an easy and fun scooter to ride around town. Its light on its feet, small enough to squeeze through the gaps in traffic and powerful enough to make good progress. The handlebars are high enough so that your knees don’t get in the way of full lock, making tight U-turns nice and easy.

Out of town, the limitations of this scooter start to become clear, with the suspension a bit harsh for long stretches and the lack of weather protection making the ride a bit fresh. But short distances on rural roads are not a problem. There’s enough speed to keep up with other traffic, but there’s not much poke for overtaking at speeds exceeding 50mph.

There’s very little space under the seat, maybe just enough for an open face helmet, but the top box comes as standard equipment, so you have some space for luggage. There’s also a little glovebox, a carry hook, and a 12V socket to round up the features.

The key themes here are simplicity and performance. For mainly urban riding, with some fast roads thrown in, this is a great scooter. It’s easy to ride, fairly comfortable, and has plenty of power. For anything more touring-oriented, a bigger engine and more weather protection would make your journey more pleasant. 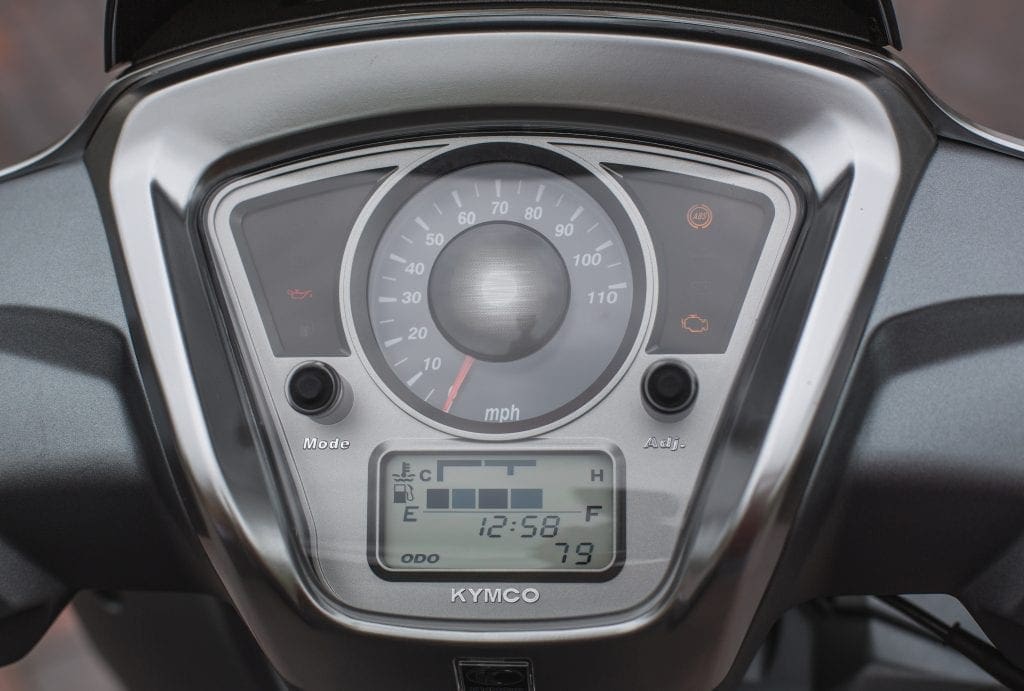 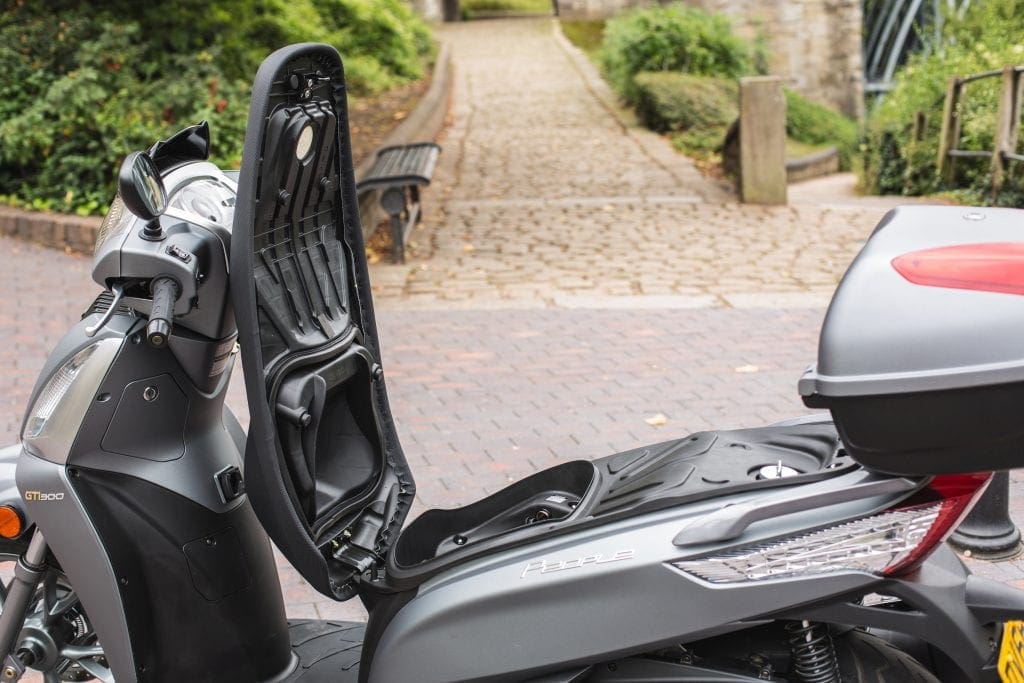