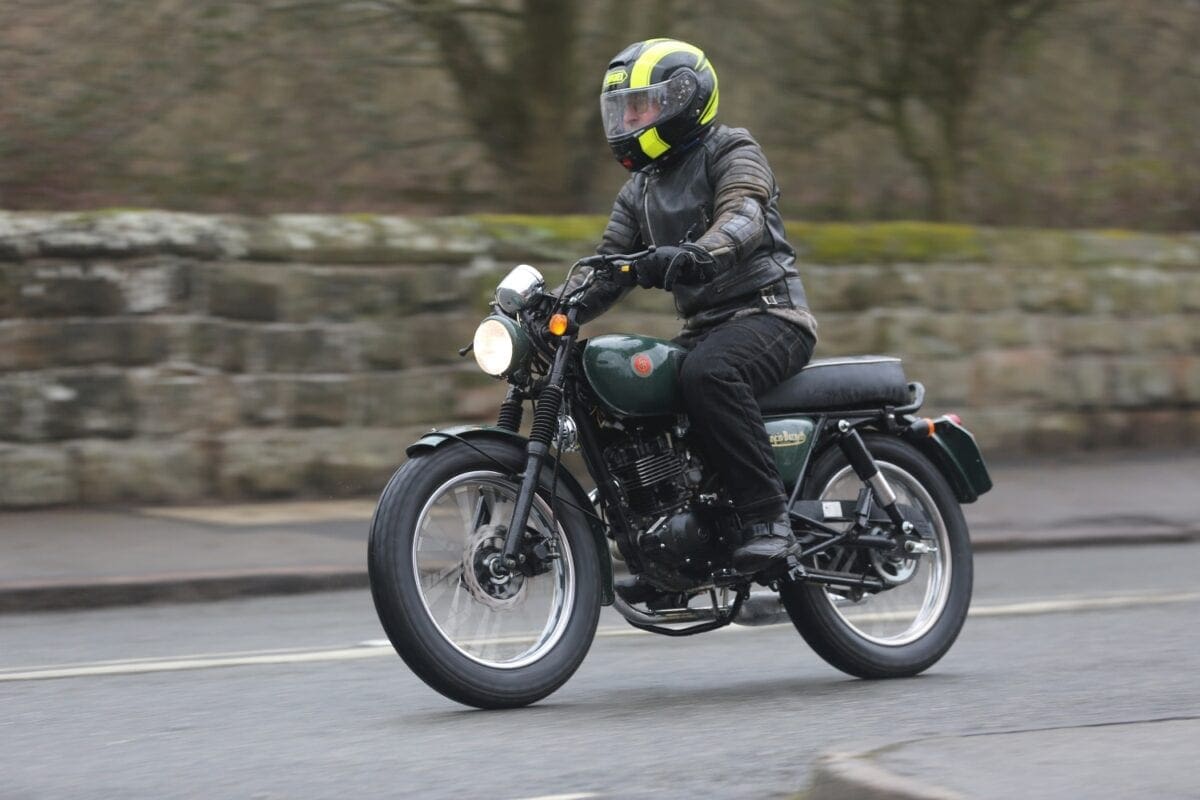 A blast from the past – is this the ultimate retro 125?

Remember Francis-Barnett? This British maker of two-stroke commuters and trials bikes went bust in 1966. But now it’s back, because a Midlands businessman (not Triumph’s John Bloor) has bought the rights to the name and re-launched the marque. He’s offering two 125s – the road-going Kestrel and the Merlin trailie.

A bike’s looks can be altered a huge amount with some detail changes and a lick of paint, so while both Francis-Barnetts’ retain the Herald’s standard engine/gearbox, frame, forks and fuel tank, other changes have transformed them.

The Kestrel has 18-inch alloy rims with stainless steel spokes, classic Brit-style silencer, narrower handlebars and fatter Dunlop K70 tyres. The rubber makes a difference, as having the same sizes front and rear gives a hint of flat track, while the seat is swapped for a Francis-Barnett replica and the shocks are shrouded, like back in the day.

The Merlin gets a 21-inch front wheel, 18-inch rear, high-level exhaust, wide braced bars and Dunlop D803 knobbly tyres; the shocks are exposed and the mudguards are aluminium (probably stainless steel on production bikes). The frame is modified, shortening the rear section so that the solo seat is in keeping.

Both bikes are finished in Francis-Barnett’s trademark Arden Green, and neither are cheap – you’re probably looking at twice the price of the standard Herald Classic for the Kestrel and more still for the Merlin, reflecting the more involved conversion. Still, there’s no denying they look like an early ’60s Brit classic.

Not much, because these bikes are destined for Sunday fun, not collecting groceries from the Co-op. And the stripped-down look is all part of the appeal.

With identical engine, frame and front forks to the Herald, it’s hardly surprising that the Francis-Barnetts’ ride much the same as them. The Kestrel’s fatter front tyre doesn’t seem to have changed the handling much and it accelerates up to 50mph like any decent geared 125, winding up to 65-70mph maximum. The only downside is that the classic-looking seat is very high which had me (30-inch leg) on tiptoes.

The Merlin isn’t as happy on the road, being less eager and slower to accelerate. Mutt Motorcycles say that the bigger rear wheel and knobbly tyre have raised the gearing – production bikes will have lower gearing to restore some zip. But on easy off-road tracks, the Merlin came into its own, light and responsive enough to make it a pleasant green-laner.

A nicely done conversion that looks the part, with all the convenience and economy of a modern 125 – but it costs at least twice the price of a Herald Classic.