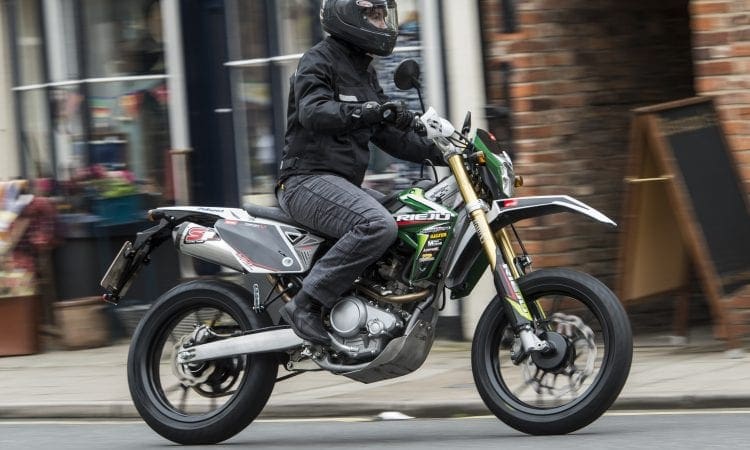 With the same engine as the Yamaha WR125 coupled with a Keihin Carb, Marzocchi 40mm shocks, wavey disc brakes and an exhaust note that will bring a smile to your face every time you open the throttle up – the Rieju Marathon Pro SM highlights back-to-basics riding at its best. 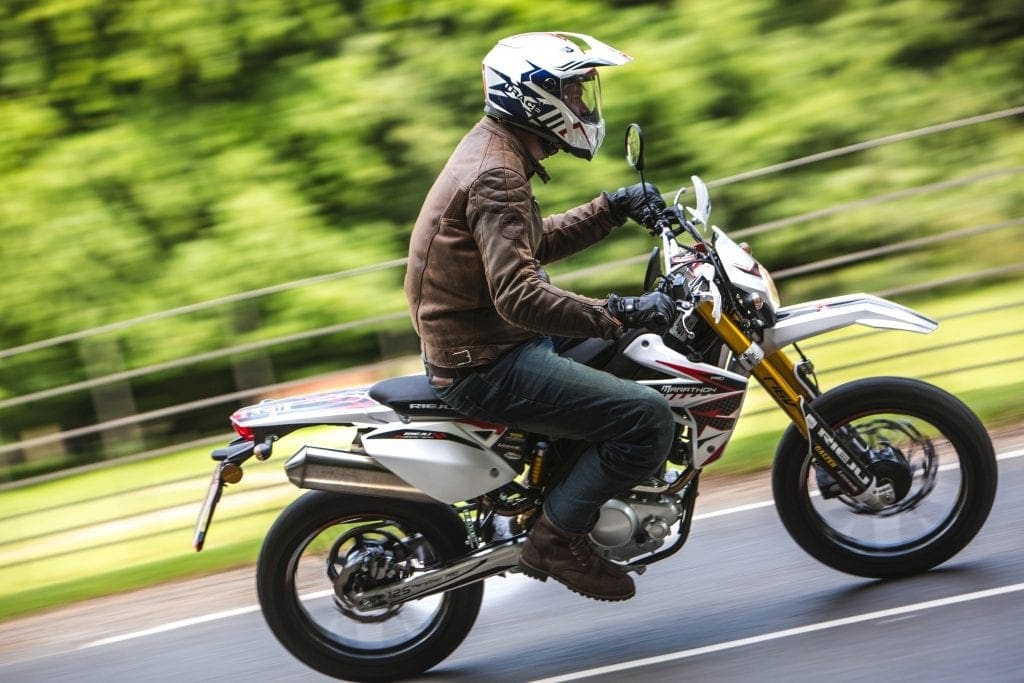 The classic Supermoto styling coupled with big forks, big brakes and the aluminium swing arm make the MRT 125 look like a larger capacity machine. My test bike also had the racing sticker pack, adding to its modern, sporty appearance – while the gold forks contrasting the white plastic fenders look really cool. The bike is well equipped, with some good tech as standard – and when compared to the slightly more expensive Yamaha, it’s only really missing a digital dash and a side stand; but these can be easily overlooked.

With a turn of the key and a press of the starter button the engine comes into life. At first a little choke will help the engine idle better due to the carb which replaces the fuel injection found on Yamaha models, but once warm you get a nice deep tone from the stock exhaust –don’t worry, it’s not loud enough to wake the neighbours. The dial display shows the basic info like speed, oil warning light, temp warning light and indicator symbols. Sadly there’s no rev counter or fuel gauge, so keep an eye on your tank as it’s a pretty thirsty bike for a 125, I owe my thanks to the reserve tank after I was nearly caught out 10 miles from the nearest fuel station.

All six gears can be used to your full advantage; unlike other 125s sixth is geared for the maximum speed and the odd gust of wind won’t make you need to knock it down a gear to build your speed up again. Get tucked in and you’ll be able to reach around 73mph. At slower speeds with half throttle the bike is almost silent, but open it up and you’ll be sure to smile as the bike roars into life.

Brakes are a little spongy at first until warmed up, with the rear brake being more intense than the front causing you to surge forward until use to it. Suspension-wise, the ride is very soft and a little too bouncy for road use on the standard setup, but great for those unsuspected potholes or spontaneous light green lane runs. The seat is very firm and after 10-15 miles it starts to get slightly uncomfortable – but this isn’t a bike aimed directly at commuters, so I put this to the back of my mind and focused on its impressive performance instead. Despite the mild discomfort, I still enjoyed every moment of riding the bike; it’s light and nimble enough to really throw into the corners with enough power to make decent progress, irrespective of any hills or headwinds.

Nearly £4000 is a lot of money for what’s essentially a basic 125 – but it’s important to remember it’s cheaper than a Yamaha equivalent, plus you can choose from loads of custom colours and decals at no extra charge.

If you’re looking for something that offers fun and freedom and is a little different to your standard 125 machine (encouraging you to shift weight as you throw the bike into corners, taking advantage of the impressive grip on offer from the Supermoto tyres) then the Rieju MRT 125 SM could be the bike for you. Its looks, sound and build quality, make this bike an all-round winner in my eyes – and because it’s so simple, there’s surely less to go wrong.