You’ve got the bike, passed your CBT and bought your kit too. Now it’s time to get some miles under your belt and get ready for your test.

Some people ride their 125 for years, others are impatient to get the full test passed. What’s really important now though is to get out there and ride. To make all the stuff you learned in CBT second nature – a routine for riding that wi 11 keep you safe and let you develop your machine control skills.

When it comes to the test, all an examiner wants to see is a rider who is confident and safe in traffic, understands the need for appropriate use of speed at all times and can interact with other road users in a safe and confident manner. And the best way to achieve all of this is to ride.

The more miles you do, the quicker it becomes second nature. Dealing with traffic, getting round corners, always being in the right place on the road and riding at the correct speed. There really is no substitute. But there is also a risk of course.

It’s easy to get sloppy without an instructor bawling in your ear. It’s also easy to forget the lifesavers and to keep your right foot covering the brake with bike in neutral. So make these drills second nature – check yourself every time and take the opportunity to do as many U-turns and controlled stops as possible.

Try to get to an empty car park at least once a week to practice slaloms, figure-of-eights, swerves and emergency stops in safety. 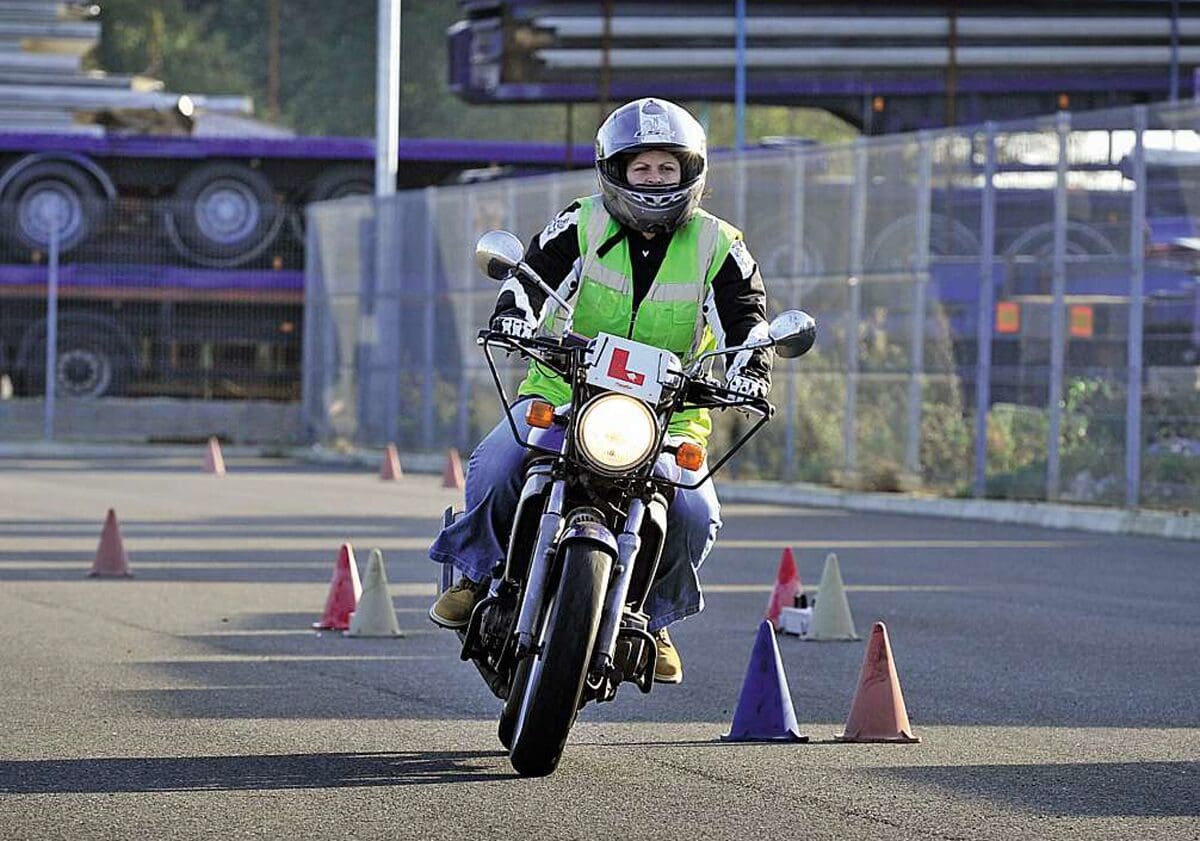 Before you can take your practical test, you have to pass the theory test. Don’t worry, it’s not difficult – the questions are common sense things that you need to know anyway. The same things that will help you be a better, safer rider anyway.

A question with several possible answers will appear. Some questions may need more than one answer. You can mark questions that you want to come back to later in the test.

Some questions will be given as a case study- a short story which five questions will be based on. This story will focus on real life experiences you will find when riding. You are allowed 57 minutes to take the test and must score 43/50 to pass.

You will be shown a short video clip about how it works and then will be shown a series of video clips featuring everyday road scenes that contain one or more developing hazards which may result in you having to take some action, such as changing speed or direction.

If you click continuously and/or randomly a message will appear telling you that you have scored zero for that particular clip.

When to respond to a hazard

There’s a parked car on the side of the road. It isn’t doing anything so to respond at this point won’t gain you marks. When you get closer to the car, its right-hand indicator starts flashing. This is a developing hazard and a click here will score marks.

If the car starts to move away as you approach, click again as this is a further development of the hazard. You will be shown a total of 14 clips with 15 developing hazards. You must score at least 44/75 to pass the test.

As your test approaches it’s a good idea to book a few more lessons. Hopefully, your instructor will be impressed with your well­practised and finely tuned skills, but they will also pick up on a whole load of bad habits and things that you need to do to impress the examiner.

Don’t worry about this – everyone finds their own way of doing things and, now you have a few miles under your belt, you’ll soon get the knack.

Your training school will usually be able to book the test area for the Module One test for you to practice on.This is invaluable­without it you are much less likely to pass. 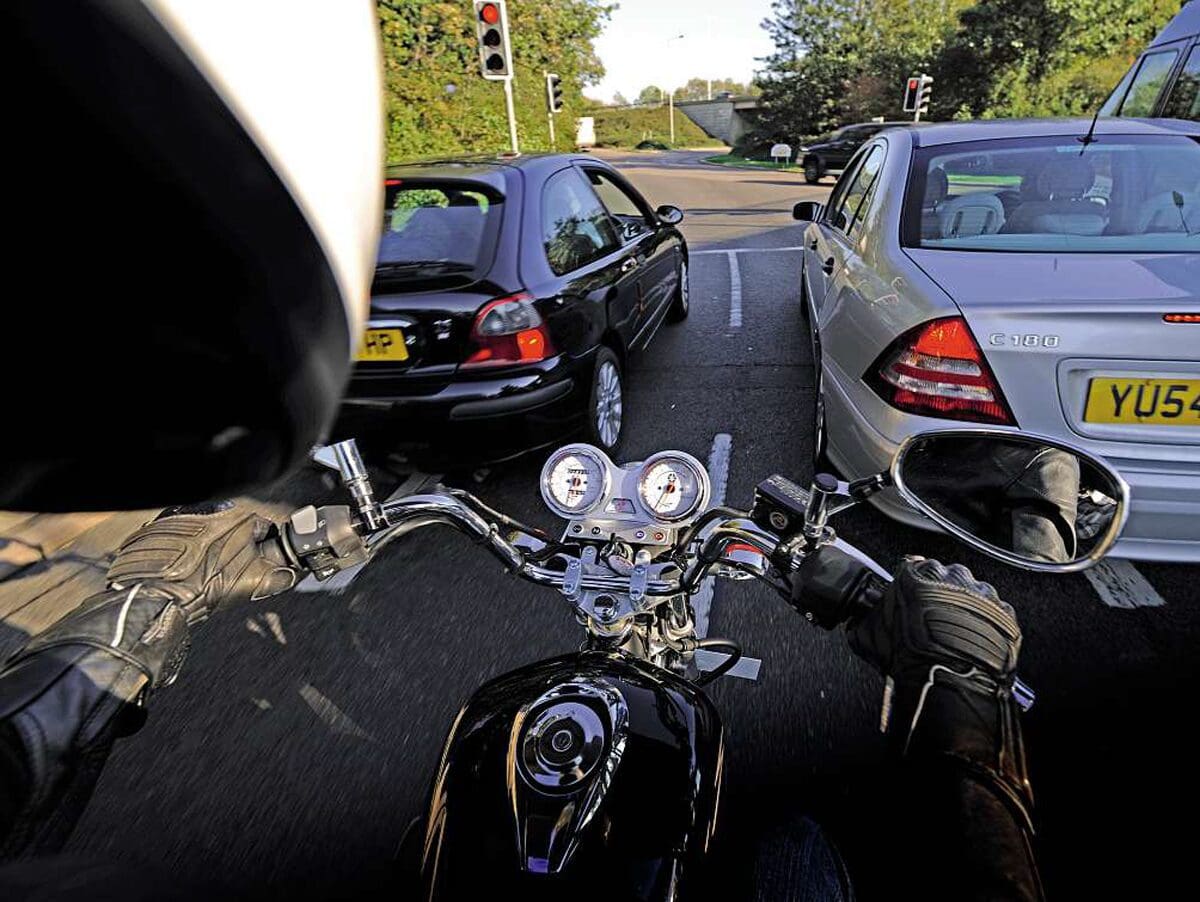 Ready for the big one? Of course you are. Here’s how to make it fun, not fearsome.

Module one is a test of your machine control and, once familiar with the layout, you’ll find there’s very little to worry about. The first few elements are repeats of some of your CBT Moving the bike around, a slalom, u-turn, slow ride at walking pace and a figure-of-eight. The new elements involve control while riding at higher speeds in a confined area.

The first part of Module One repeats a lot of the stuff from your CBT. The difference is that in CBT you can repeat it a few times till you get the hang of it, but this time you are being assessed and you need to get it right first time. But that’s fine because you’ve now had lots of practice, so don’t worry.

You will be asked to ride around the edge at the top of the test arena in between two sets of cones. As you come back into a straight line you must pass through a speed trap (where you must achieve at least 19mph) and then come to a controlled stop with your front wheel in a square of four cones.

The exercise gets you familiar with the curve at the top of the test arena and the path that the cones take. The curve is a gentle one and there’s plenty of room to get up to the required speed, so don’t worry. You could be asked to ride it as a left-hand bend or right-hander, so make sure you are confident in both.

The next exercise is the swerve and stop test. In this one, you ride the circuit again, but you must hit a speed of 31mph as you go through the speed trap. Immediately after the speed trap are a couple of blue cones through which you must ride. This required you to lean the bike briskly to the left or right (depending on which way the examiner has asked you to go) and back again to a straight line to stop with your front wheel in between the four cones.

It sounds complicated, but the hardest part (especially on a 125cc bike) is getting up to the required speed in time. In order to make the bike turn quick;y and precisely, you need to be on a steady throttle, not still accelerating.

The final test is an emergency stop from 31mph. To do this you come around the top bend and go through the speed trap. As you enter the trap the examiner will raise their hand and have to stop in a safe, controlled manner as quickly as you can.

The trick here is to shut the throttle as soon as the examiner raises their hand and apply the brakes a fraction of a second later. As before, if you brake while accelerating you lose the weight transfer to the front wheel and increase the likelihood of locking the front wheel.